Character Types And The Five-Bad Band 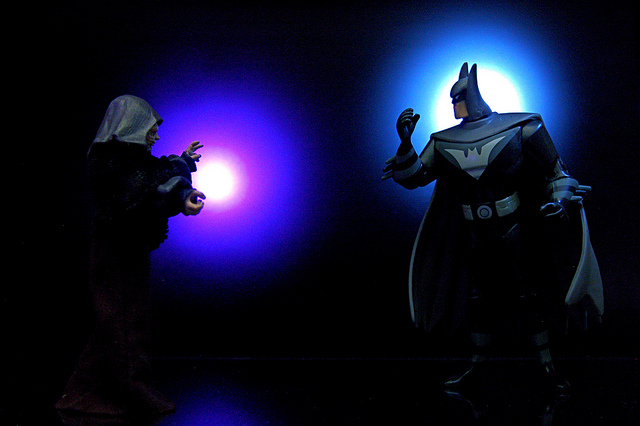 I've spent hundreds of hours over at tvtropes.org pouring over their character descriptions. The Barnum, for instance, is a kind of trickster character who lives by exploiting greed. Equally interesting--especially to those watching Under The Dome--is the Honest John's Dealership trope.

As I was searching through the forest of descriptions I came upon something called The Five Bad Band that (suitably modified) I'm going to use in my next story. I was so excited to find it, I had to share it.

First, I'll talk about what the Five Bad Band is and then we'll go over a few ways it's been used.


The first time I heard the term, "the Big Bad," was during an episode of Buffy the Vampire Slayer.

The Big Bad is the ultimate villain, the mastermind, the strongest of the strong and the baddest of the bad. You do not want to meet this guy/gal after lights out.

The Big Bad has the role of leader.

The Big Bad might go head-to-head either with the Big Good (if there is one) or the hero.

Examples: Emperor Palpatine from Star Wars, Big Jim Rennie from Under The Dome.


This is the Big Bad's right hand man (or woman).

If the Big Bad is going head-to-head with the Big Good then The Dragon will be the hero's nemesis.

What's a nemesis? The way I think of it, the nemesis is a character a lot like the protagonist--in fact, under other circumstances, they might be great friends--but their goals place them in conflict.

Here's what Scott Myers writes of the nemesis:


"If the Protagonist is most often your story’s most important character, the Nemesis is not far behind. Indeed some of the greatest characters in film history have been Nemeses including Darth Vader (Star Wars: Episode IV — A New Hope), the Wicked Witch of the West (The Wizard of Oz), Nurse Ratched (One Flew Over the Cuckoo’s Nest), and the shark (Jaws).

"If conflict is the stuff of great drama, there is perhaps no conflict more compelling than that of a Protagonist versus a Nemesis."

Often The Dragon can be persuaded to switch sides even though he is the member of the team most trusted by the Big Bad.

As the article over at tvtropes.org puts it:


"[The Dragon is] more likely to be The Hero's Evil Counterpart or Worthy Opponent within the context of the story than the Big Bad is."


This is one smart puppy. Often he/she makes and operates all sorts of dastardly weapons.

Usually the evil genius doesn't care about overarching schemes or the big picture. He wants to be paid well, be paid on time, and stay alive long enough to spend his money.

Example: The tech guy on the short-lived TV series The Dollhouse. Here's another one from tvtropes.org:


"Barty Crouch Jr. is a better example. He replaces a teacher, kills his father, and lures Harry away from potential protectors, and no one realizes until nearly the last moment what he's up to." (Evil Genius)


If the Evil Genius is at the top of the intellectual ladder The Brute is at the bottom. For all that, they are second in power to The Dragon. If anything happens to The Dragon, they'll take over. A fact that does not escape their attention.

The Brute is, as the name implies, physically powerful, though they couldn't best The Dragon in a fair fight.

The Brute is also the most sadistic of the Five Bad Band.

For numerous examples click here and scroll to the bottom of the page.


The Dark Chick acts very different from the other members of the group. She adds color to the group and in all other ways stands out from them.

The Dark Chick is the 'loose canon' and the most likely to be redeemed and join the side of good. If The Dragon switches sides she might end up as his lady love. If not, she might end up with the hero.

If The Dark Chick and the hero or Dragon don't walk hand-in-hand into the sunset, she may form a pathological need to kill either of them after they spurn her affections.

I'd like to note that, although the description over at tvtropes.org talks about four men and a rather kinky gal it's fine to make them whichever sex you'd like.

In this article I've talked about the Five Bad Band but there is a corresponding Five Man Band composed of the hero and his companions. (Bit of a tongue twister!)

If you read the description of the Five Man Band you see that it can fit many different fictional groups. For instance, Buffy and her gang as well as the characters from Scooby Doo.

That's it for today! I have to tear myself away from reading tvtroups.org and do some writing now. (grin)