Stephen King Talks About Doctor Sleep, Winnebagos & A Movie Prequel To The Shining 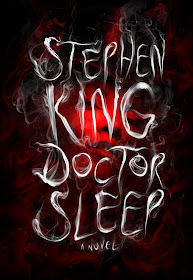 I just came across this interview of Stephen King on the subject of Doctor Sleep, the sequel to The Shining. It's very good. King seems relaxed and happy to chat.

In addition to discussing his upcoming book, Doctor Sleep (due out this September 24th), King discusses the possibility of a movie prequel to The Shining.


King's Goal For Doctor Sleep: To Scare The S-t Out Of You!


At one point the interviewer, Anthony Breznican over at EW.com, asks Stephen King how will he know if Doctor Sleep was successful. King replies:


Basically, the idea of the story was to try and scare the s–t out of people. [Laughs.] I said to myself, ‘Let me see if I can go and do that again.’ There’ve been a couple of books that haven’t really been that way. 11/22/63 was a lot of fun to write and a lot of people read it and seemed to like it, but it’s not what you’d call a balls to the wall scary story. The same was true of Under the Dome. I wanted to go back to that real creepy scary stuff. We’ll see if it works. I like the book, or I wouldn’t have ever wanted to publish it.


RVing: "... the perfect way to travel around America and be unobtrusive if you were really some sort of awful creature"


About the villains, The True Knot, "a kind of nomadic group of people who masquerade as Winnebago-riding old timers but feed off people who have psychic energy" King says:


Driving back and forth from Maine to Florida, which I do twice a year, I’m always seeing all these recreational vehicles — the bounders in the Winnebagos. I always think to myself, ‘Who is in those things?’ You pass them a thousand times at rest stops. They’re always the ones wearing the shirts that say ‘God Does Not Deduct From a Lifespan Time Spent Fishing.’ They’re always lined up at the McDonald’s, slowing the whole line down. And I always thought to myself, ‘There’s something really sinister about those people because they’re so unobtrusive, yet so pervasive.’ I just wanted to use that. It would be the perfect way to travel around America and be unobtrusive if you were really some sort of awful creature.

King also reminds readers that Doctor Sleep is a sequel to the book not the movie:


Will There Be A Movie Prequel To The Shining?

AB: There has recently been talk of a movie prequel to The Shining. It’s based on material cut from your novel, about the early history of the Overlook. Warner Bros, which made Kubrick’s film, has been exploring whether there’s another movie in it. How do you feel about that?

SK: There’s a real question about whether or not they have the rights to ‘Before the Play,’ which was the prologue cut from the book — because the epilogue to the book was called ‘After the Play.’ So they were bookends, and there was really scary stuff in that prologue that wouldn’t make a bad movie. Am I eager to see that happen? No I am not. And there’s some real question about what rights Warner Bros. does still have. The Shining is such an old book now that the copyright comes back to me. Arguably, the film rights lapse — so we’ll see. We’re looking into that. I’m not saying I would put a stop to the project, because I’m sort of a nice guy. When I was a kid, my mother said, ‘Stephen if you were a girl, you’d always be pregnant.’ I have a tendency to let people develop things. I’m always curious to see what will happen. But you know what? I would be just as happy if it didn’t happen.


Stephen King ends by saying that if there were a Stephen King World akin to Disney World "people would only go on the rides … once."

It's a great interview, I highly recommend it to King fans, and anyone wanting a peek behind the curtain: Stephen King unearths origin of 'The Shining' sequel 'Doctor Sleep' -- EXCLUSIVE.

- Handy Guides To Avoiding Mistakes In Grammar
- Hugo Gernsback And The Future That Might Have Been
- The Writer's Journey: Writer As Hero