How To Communicate Setting: Establishing Shots 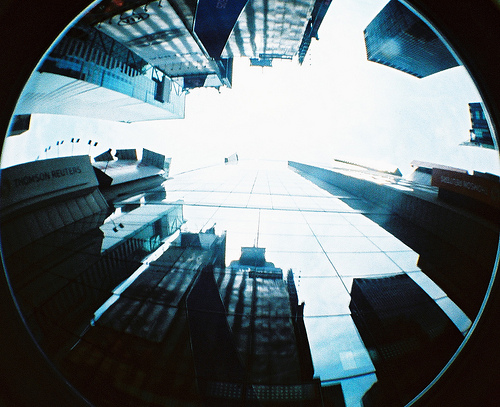 C.S. Lakin has written another brilliant post, this time about establishing setting, and she starts off by making an excellent point:


[A] novel is not a visual experience unless you make it one. ... [W]ith novels, you always want to try and show a scene through the POV character's eyes and colored by her emotions, state of mind, way of thinking.

How do you do this? With the equivalent of an establishing shot.


This is from Wikipedia:


An establishing shot in filmmaking and television production sets up, or establishes the context for a scene by showing the relationship between its important figures and objects.[1] It is generally a long- or extreme-long shot at the beginning of a scene indicating where, and sometimes when, the remainder of the scene takes place. (Establishing Shot)

C.S. Lakin gives an example from Le Carré's book The Constant Gardener that I include, below, but I'll first give you one from Dean Koontz's What The Night Knows. Yes, I know, that's quite a difference in both authors and genres, but read this paragraph and tell me if you don't think it's a great establishing shot.


Dean Koontz, What The Night Knows

The state hospital stood on a hill, silhouetted against a gray and sodden sky. The September light appeared to strop a razor's edge along each skein of rain.

"... to strop a razor's edge along each skein of rain." I like that, the image of a razor, of a razor in motion, controlled motion, being sharpened, getting ready.  Dean Koontz continues:


A procession of eighty-foot purple beeches separated the inbound and the outbound lanes of the approach road. Their limbs overhung the car and collected the rain to redistribute it in thick drizzles that rapped against the windshield.

The thump of the wipers matched the slow, heavy rhythm of John Calvino's heart. He did not play the radio. The only sounds were the engine, the windshield wipers, the rain, the swish of tires turning on wet pavement, and a memory of the screams of dying women.

I'd say that sets the scene effectively. "Their limbs", "slow, heavy rhythm of John Calvino's heart", "memory of the screams of dying women". Yes, okay, it lacks some of the pure poetry of Le Carré, but, come on, that is Le Carré. He gives writers inferiority complexes.


Here's the passage C.S. Lakin quoted, and it is truly epic:


The mountain stood black against the darkening sky, and the sky was a mess of racing cloud, perverse island winds and February rain. The snake road was strewn with pebbles and red mud from the sodden hillside. Sometimes it became a tunnel of overhanging pine branches and sometimes it was a precipice with a free fall to the steaming Mediterranean a thousand feet below. He would make a turn and for no reason the sea would rise in a wall in front of him, only to fall back into the abyss as he made another. But no matter how many times he turned, the rain came straight at him, and when it struck the windscreen he felt the jeep wince under him like an old horse no longer fit for heavy pulling.

Wow. Even just the first sentence makes me want to take a deep breath of the crisp damp air and look for my umbrella.


Look at some of the words he [Le Carré] uses: black, darkening (his quest to find answers is getting that way), perverse (that too), winds, rain, snake, sodden, tunnel, precipice . . . I don’t need to go on—you get the point. The Establishing Shot in this scene was no doubt chosen to work as a metaphor, as the reader has been watching Justin Quayle going through a similar emotional roller coaster, rising and falling into an abyss, turning one way then another, but getting nowhere fast. His task to find answers feels like he’s prodding “an old horse no longer fit for heavy pulling.” And the weight he is carrying is heavy. Powerful, right?

That’s all Le Carré needs to start the scene, and from there we move on to other camera shots revealing important plot points leading to a high moment in his scene. I won’t tell you what that is; you can read it for yourself, and I hope you do. Few writers handle words as masterfully and deliberately as does Le Carré, and he’s a great author to study for cinematic structure.

This week I'm going to do as C.S. Lakin suggests and look at the scenes in my work in progress to see whether I succeed in establishing the scene before I start in with dialogue.

All quotations, unless otherwise noted, are from C.S. Lakin's article Establishing Shots That Reveal Character.

- Writing And The Monomyth
- Steven Pressfield Gives Writers A Pep Talk In A "Get Off Your Duff And Start Writing!" Kind Of Way
- A Pep Talk

Photo credit: "A fish's view of NYC skyscrapers" by kevin dooley under Creative Commons Attribution 2.0.
Karen Woodward at 11:00:00 AM
Share