The MacGuffin: A Plot Device From Screenwriting 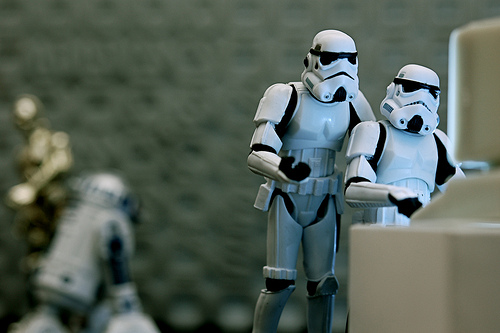 I thought I'd do something different today and talk about a term from screenwriting: The MacGuffin. I find that once I put a name to an idea that I can more easily understand it, talk about it, and--perhaps--use it in my own work.

Did you know that the falcon in The Maltese Falcon was a MacGuffin? You probably did. I had no idea. Let me explain. (No, there is too much. Let me sum up. Couldn't resist! I re-watched The Princess Bride last night.)

A MacGuffin is a "plot device in the form of some goal, desired object, or other motivator that the protagonist (and sometimes the antagonist) is willing to ... sacrifice almost anything to pursue, often with little or no narrative explanation as to why it is considered so desirable. (MacGuffin, Wikipedia)"


Alfred Hitchcock is thought to have come up with the idea, or at least the term "MacGuffin". Apparently Pearl White, a silent film actress, used the term "weenie" in much the same way. (MacGuffin, tvtropes.org)

Here's how the incomparable Mr. Hitchcock explained the MacGuffin. The year was 1939 and he was giving a lecture at Columbia University:

Hitchcock went on to remark that although a MacGuffin is an object the plot revolves around that--and this crucial--the "audience don't care" what it is specifically. Or, rather, even if they are curious, the true nature of the object is immaterial to the plot (MacGuffin, Wikipedia). A classic example of this is the suitcase in Pulp Fiction.


TvTropes.org has a wonderful discussion of the MacGuffin. For instance, here is the test to see if something is functioning as one:


[C]heck to see if it is interchangeable. For example, in a caper story the MacGuffin could be either the Mona Lisa or the Hope diamond, it makes no difference which. The rest of the story (i.e. it being stolen) would be exactly the same. It doesn't matter which it is, it is only necessary for the characters to want it.

A common MacGuffin story setup can be summarized as "Quickly! We must find X before they do!". (MacGuffin, tvtropes.org)


R2-D2 is an example of a MacGuffin. George Lucas describes R2-D2 as the driving force of Star Wars. The droid that was the object of everybody's search. Lucas differed from Hitchcock in that he thought the MacGuffin should be powerful, that the audience should care about it.

For instance, while we were curious what was inside the briefcase in pulp fiction, it wasn't important to us as a character. R2-D2, on the other hand, was a character most movie goers genuinely cared about every bit as much as Luke Skywalker or Han Solo. (MacGuffin, Wikipedia).

Other examples of MacGuffins: the Maltese Falcon, the briefcase in Pulp Fiction, the mineral Unobtainium in Avatar.


Sometimes I suspect screenwriters are joking when they come up with all these names, but apparently, there's also a Mock Guffin; that is, an object thought to be of great value that turns out to be junk. For instance, bank bonds that are at first thought to be extremely valuable then turn out to be worthless.

This may be the only article I post today so I'll give my NaNoWriMo update now. As of last night my word count was 22,031 and today I'm hoping to get it up to 24,000. Thanks for being my writing buddies, go us! :-)

- Serial Fiction: Is It Profitable?
- What's The Difference Between Paranormal Romance And Urban Fantasy?
- A NaNoWriMo Pep Talk From Neil Gaiman

Other (off site) articles:

Photo credit: "The Death Star plans are not in the main computer" by JD Hancock under Creative Commons Attribution 2.0.
Karen Woodward at 10:37:00 AM
Share