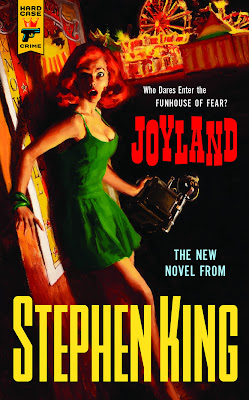 
Not only is King going retro with the setting of his upcoming novel, he’s also sticking to a tried-and-true format. “I love crime, I love mysteries, and I love ghosts,” he said in the press release. “I also loved the paperbacks I grew up with as a kid, and for that reason, we’re going to hold off on e-publishing this one for the time being. Joyland will be coming out in paperback, and folks who want to read it will have to buy the actual book.”

Charles Ardai, editor of Hard Case Crime, promises a layered, genre-crossing story. “Joyland is a breathtaking, beautiful, heartbreaking book,” he said. “It’s a whodunit, it’s a carny novel, it’s a story about growing up and growing old, and about those who don’t get to do either because death comes for them before their time. Even the most hard-boiled readers will find themselves moved. When I finished it, I sent a note saying, ‘Goddamn it, Steve, you made me cry.’” (See the cover of 'Joyland' by Stephen King)

I find Stephen King's stories usually either make me scared of the dark, closets, washrooms (especially toilets) and dogs, or they turn me into a puddle of tears. This one seems to be the puddle of tears kind, although I do have the feeling I might not want to go to any carnivals after dark, at least for a while .... None of that matters, though. I've marked my calendar and am counting the days until Joyland hits the shelves. :-)

Other articles you might like:
- Stephen King: 15 tips on how to become a better writer
- Stephen King on Ray Bradbury: The sound I hear today is the thunder of a giant's footsteps fading away
- Henry Miller's 11 Writing Commandments