Fifty Shades of Grey - Oh My! 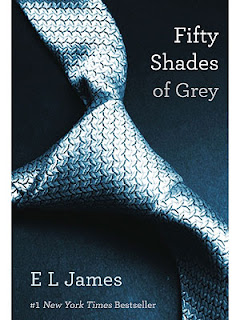 I'm not quite finished the Fifty Shades series by author E.L. James but I've read enough to be surprised by the fuss over the trilogy, especially the first book, Fifty Shades of Grey. Which isn't to say I don't think they're wonderful books.

Here's what I'm talking about. I found this paragraph in the Wikipedia entry for Fifty Shades of Grey:


By the release of the final volume in January 2012, news networks in the United States had begun to report on the Fifty Shades trilogy as an example of viral marketing and of the rise in popularity of female erotica, attributing its success to the discreet nature of e-reading devices.

I feel I must have been living under a rock for the past few months, but the first I heard of Fifty Shades was when I did by blog post for the indie bestseller Wool and that book was compared to Fifty Shades of Grey in its sudden and astonishing popularity. Since nothing else was said about Fifty Shades the description aroused my curiosity. When I walked into Chapters the next day I had forgotten all about the book, but when I saw it perched at the top of the bestsellers bookshelf, I picked it up and began reading.

And I read, and read, and read. By the time my friend came back from his clothes shopping I was 20 pages in and thoroughly hooked. What attracted me wasn't salacious curiosity about the hinted at peek into the world of DBSM, it was good writing and the promise of a sweet love story.

At the moment I'm a third of the way through James' last book, Fifty Shades Freed, and would describe the series as being more about the redemptive power of love than anything else.

In a sense, Fifty Shades is an urban fairy tale.

Being of a certain age I have come to the opinion that people do not change drastically. Someone with issues on the scale of Christian Grey is not likely to transform themselves because of the power of love. (And, yes, I do glare and youngsters and sporadically growl "Humbug!" during Xmas.) But it's a nice thought.

I gather that James' prose has been criticized, but I wonder what they are comparing it to. Margaret Atwood? Neil Gaiman? Stephen King? Not many writers could stand up to that sort of scrutiny. Personally I thought she did fine, but I'm comparing her with writers like Charlaine Harris (The Southern Vampire Series, True Blood), Laurell K. Hamilton (Anita Blake Series) and even Kim Harrison (The Hollows Series).

Here are excerpts of the non-steamy variety from all four authors, see what you think:


I'd been waiting for the vampire for years when he walked into the bar.

Ever since vampires came out of the coffin (as they laughingly put it) two years ago, I'd hoped one would come to Bon Temps. We had all the other minorities in our little town--why not the newest, the legally recognized undead? But rural northern Louisiana wasn't too tempting to vampires, apparently; on the other hand, New Orleans was a real center for them--the whole Anne Rice thing, right?


I stood in the shadows of a deserted shop front across from The Blood and Brew Pub, trying not to be obvious as I tugged my black leather pants back up where they belonged. This is pathetic, I thought, eyeing the rain-emptied street. I was way too good for this.

Apprehending unlicensed and black-art witches was my usual line of work, as it takes a witch to catch a witch. But the streets were quieter than usual this week. Everyone who could make it was at the West Coast for our yearly convention, leaving me with this gem of a run. A simple snag and drag. It was just the luck of the Turn that had put me here in the dark and rain.


Willie McCoy had been a jerk before he died. His being dead didn’t change that. He sat across from me, wearing a loud plaid sport jacket. The polyester pants were primary Crayola green. His short, black hair was slicked back from a thin, triangular face. He had always reminded me of a bit player in a gangster movie. The kind that sells information, runs errands, and is expendable.

Of course now that Willie was a vampire, the expendable part didn’t count anymore. But he was still selling information and running errands. No, death hadn’t changed him much. But just in case, I avoided looking directly into his eyes. It was standard policy for dealing with vampires. He was a slime bucket, but now he was an undead slime bucket. It was a new category for me.


I scowl with frustration at myself in the mirror. Damn my hair--it just won't behave, and damn Katherine Kavanagh for being ill and subjecting me to this ordeal. I should be studying for my final exams, which are next week, yet here I am trying to brush my hair into submission. I just not sleep with it wet. I must not sleep with it wet. Reciting this mantra several times, I attempt, once more, to bring it under control with the brush. I roll my eyes in exasperation and gaze at the pale, brown-haired girl with blue eyes too big for her face staring back at me, and give up. My only option is to restrain my wayward hair in a ponytail and hope that I look semi-presentable.

Yes, all right, James' excerpt -- and, by the way, these were all the first paragraphs of the first book in their respective series -- was about boys and girls living in this world, a world not populated by dark, brooding, sexy and forbidden supernatural creatures, but since her book did start off as fan fiction for the Twilight Series I thought it was appropriate. In any case, I don't read many romance books, so I used what I had in my bookshelf.

If you haven't read Fifty Shades of Grey I'd recommend giving the first few pages a try.

Whatever is currently on your nightstand, happy reading!

You might also be interested in:
- 19 Ways To Grow Your Twitter Following.
- How To Sell 100 Books Per Day: 6 Things You Need To Do
- Writers: In Order To Win We Must Embrace Failure