How To Write A Murderously Good Mystery 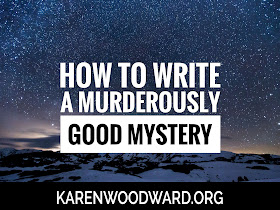 I'm putting together a series of articles, one on each of the character types in a murder mystery: the murderer, detective, detective's helper, the police representative, the first victim, the suspects and experts.

(BTW, I've written a book about how to write a murder mystery: How to Write a Murderously Good Mystery: The Major Characters.)

Book One: The Main Characters

Tips for Creating the Perfect Sidekick for Your Detective
6 Ways a Sidekick Can Enhance Your Story
Make Your Sidekick Unique and Memorable: 5 Tags and Traits of the Sidekick
The Detective’s Sidekick: 3 Character Types
Let's Create a Sidekick!

Making the First Victim
The Making of a Victim

Ways to Make a Client
The Making of a Client

Ways to Make an Expert
The Making of an Expert

Book Three: The Structure of a Murder Mystery

Setting
A Murder Mystery in Five Acts
Act One
- Subplot: Initial crime/event that ends when a body (or another body) is found. Could be a crime or, for example, a fête.
- Introduce characters.
- Subplot: midpoint for initial, spins story off in a new direction.
- First body found.
Act Two
- If the detective hasn't already been introduced, then introduce him/her here.
- Meet characters again and see how they change when they talk to the detective.
- The detective is led astray.
- Second body found.
Act Three
- All Hope is Lost: Perhaps superior takes the case away from detective or threatens to. The detective has no idea who committed the crime.
- Midpoint: Sleuth gets new information. The detective is now on the right track. New theory of the crime.
- Subplot: The detective solves the crime (the one at the beginning of the story).
- As a result of solving the crime (or possibly because of something his sidekick says) the detective has a ah-ha! moment and figures out the identity of the murderer.
Act Four
- Sleuth enacts plan to trap the killer. Perhaps he knows who the next victim is and must save them (ticking clock).
- The trap: Fake a 3rd murder.
- The reveal.
Act Five
- The Wrap Up: basically a long sequel where loose ends are dealt with.

Example Outline (This is a ROUGH draft!)


If that's not enough about how to write a mystery here are links to a few articles I've written about the subject over the years:

How To Write A Murderously Good Mystery
In The Guilty Vicarage Auden--a self-confessed addict of murder mysteries--talks about what elements go into creating a great, wonderfully escapist, murder mystery. In this article I concentrate on the overall structure of a whodunit.

The Importance of Setting
In this article I discuss the role of setting, or milieu, in writing a murderously good mystery. Among other things, I talk about the importance of a closed society in writing a cosy and discuss how to select a setting that maximizes the wrongness of murder as well as the tension murder creates.

How To Create A Murderer Your Readers Will Love To Hate
W.H. Auden writes in The Guilty Vicarage that the test of a good detective story is twofold: a) The reader must be surprised when the sleuth reveals the identity of the murderer and b) The reader must believe that "everything he has previously been told about the murderer is consistent with his being a murderer." An excellent test! Also, it highlights an important point: a murder mystery is primarily about the murderer. Not the sleuth, not the sidekick, not even the victims. After all, it is the murderer's desire, his goal, that drove him to kill. Given this what qualities should the murderer have? How can we get our readers to love to hate him or her?

How To Create A Sleuth Your Readers Will Root For
What is the single most important characteristic of a detective? That they be entertaining! The detective's actions must convince our wonderful readers to continue turning the page. But how do we do this? Read on to find out!

So, what traits should our hero possess?


Other articles on how to write a mystery:

How To Write A Terrific Murder Mystery, Part Two


How To Write A Terrific Murder Mystery, Part One

How To Write A Murder Mystery: Part Two

5 Rules For Writing A Murder Mystery: Keeping the Murderer Secret Until The End


How To Write A Murder Mystery, by Lee Goldberg.

5 Tips to Create a Page-Turning Plot, by Elizabeth Spann Craig.