How to Write a Genre Story: Characters: How to Show Not Tell 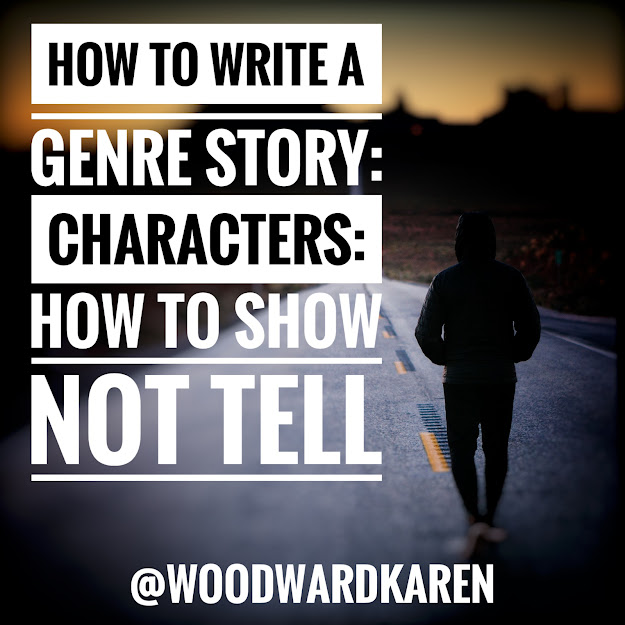 We want some characters to be one-dimensional, characters such as the impatient pizza delivery person or the chatty cabby. They walk on and off the page and are barely noticed. They briefly interact with one of our main characters and then fade from memory. As E.M. Forster writes in Aspects of the Novel:

"We may divide characters into flat and round. Flat characters were called 'humorous' in the seventeenth century, and are sometimes called types, and sometimes caricatures. In their purest form, they are constructed round a single idea or quality...."

Main characters, on the other hand, must be three-dimensional, and memorable. They must seem to live and breathe.

You might think: But isn’t telling always bad and showing always good? In a word: no. Showing isn’t always preferable to telling, it all depends on context. We can't show all the way through a novel--not only would that be exhausting for the writer and reader but it would make the novel about a million words long!

Showing is important when we’ve reached a plot point or when a main character does something significant. Then we want to slow down and focus on them and show.

If you wish to characterize your fictional person directly simply tell your readers about them. Here are a couple of examples from Stephen King:

"A small boy in a yellow slicker and red galoshes ran cheerfully along beside the newspaper boat." (It, Stephen King)

"She was so pretty, with pink cheeks and bright brown eyes, and her hair the shade of blond you know will darken and get mousey. Sweet is the only word that fits. Sweet and bright and innocent." (Carrie, Stephen King)

Continuing with my Stephen King theme, here's an example drawn from his delightful paperweight of a book, Under the Dome:

"Some newscaster is blabbing away, using words like wonderful and amazing. The second time he says I have never seen anything like this, Martha mutes the sound, thinking Nobody has, you dummocks. She is thinking about getting up and seeing what there might be in the kitchen to snack on (maybe that's wrong with a corpse in the room, but she's hungry, dammit), when the picture goes to a split screen." (Under The Dome by Stephen King)

After reading that passage what do we come away thinking about Martha? She seems to be the kind of person who doesn't suffer fools gladly. She also seems ruthlessly pragmatic. If she wants to watch TV and drink beer and eat snacks then having the corpse of her great uncle in the room isn't going to stop her. What does that say about her? It's possible she's insensitive (an understatement), but she's been living under the dome for the better part of a week and none of these people are quite who they were at the beginning.

“He [Hodges] gets up and strides around in an unsteady circle on legs like stilts, yanking at his hair so hard his eyes water…” (Mr. Mercedes, Stephen King)

My attention was drawn to that particular quote by Larry M Edwards’ article, “Show, Don’t Tell: A Writing Lesson from Stephen King.” We can SEE the action here. If King had wanted to tell rather than show he might have written something like: “He was upset,” but of course that pales in comparison.

Here King shows, through a character's speech, just how addicted to alcohol he has become.

"I really need it [alcohol] Johnny. No joke. Just a little, to stop the shakes. I'll make it last. And I won't get up to no dickens. Swear on my mother's name. I'll just go home." (Stephen King, Under The Dome)

What does that passage tell us? Among other things that Johnny is addicted to alcohol. But that's never said. Also, the speech has a certain cadence; when I read it, it had a certain sound. It's pleading, almost whining--like a beaten dog.

Here's another example, this one isn't by Stephen King. Here Edith Wharton uses a narrator to describe a character's speech and, in so doing, describes the essence of the character.

"He [Greer] has a voice like thick soup, and speaks with the slovenly drawl of the new generation of Americans, dragging his words along like reluctant dogs on a string..."

"Dragging his words along like reluctant dogs on a string," that lays bare the character's essence.

How can we use how a character looks, his clothing, his characteristic stances, his expressions, to reveal his essence? In A Game of Thrones, George R.R. Martin writes:

"He [Ser Waymar] wore black leather boots, black woolen pants, black moleskin gloves, and a fine supple coat of gleaming black ringmail over layers of black wool and boiled leather. Ser Waymar had been a Sworn Brother of the Night's Watch for less than half a year, but no one could say he had not prepared for his vocation. At least insofar as his wardrobe was concerned."

In other words, the narrator--Will--sees the knight as being all flash, no substance. He is a leader because of his birth but, in Will's eyes, it takes more than high birth to make one a true leader. These two sentences, then, give us information not only about Ser Waymar (he's vain, proud, young, and entirely unprepared for the challenges he will face), but also about the viewpoint character, Will.

We can use one character to reveal another character’s essence. Does she greet him warmly, does she sneer, does she cringe away? Here is another example from George R.R. Martin's work, A Game of Thrones:

"Gared's hood shadowed his face, but Will could see the hard glitter in his eyes as he stared at the knight. For a moment he was afraid the older man would go for his sword. It was a short, ugly thing, its grip discolored by sweat, its edge nicked from hard use, but Will would not have given an iron bob for the lordling's life if Gared pulled it from its scabbard."

In the prologue to, “A Game of Thrones,” Martin shows how much story can be told in a relatively short space. Martin develops the character of Ser Waymar throughout the prologue and he does this largely by showing how he affects the men under his charge. The passage I gave above is just one instance of that. To put it mildly, he rubs them the wrong way. They think he is soft, young, and ignorant of the dangers of the cold and the forest. They don't trust him. In the above passage Martin shows what Gared, a wise old man of the Night Watch, thinks of one of the knight's orders; an order he is sure will get them all killed.

So! That's it. I hope you have a wonderful day. I'll talk to you again soon. Good writing!

These articles are worth a close read: