Good Storytelling: Give Your Characters Something to Die For (Part One) 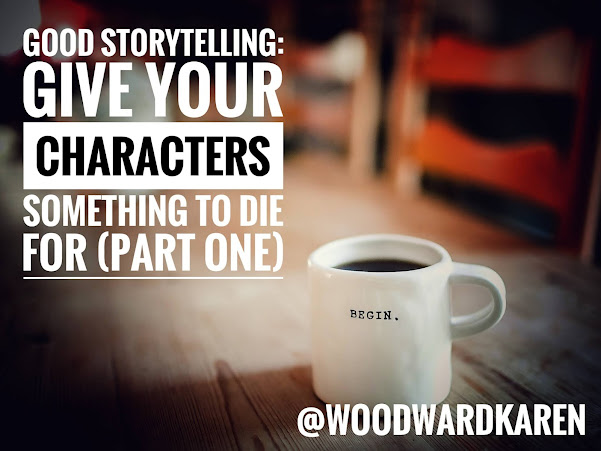 First, a caveat. In the following I say things about ‘all X,’ for example, ‘all main characters,’ but of course statements like that are generalizations. There are wonderful stories that do not fit into the patterns I describe.[1]

The Importance of a Good Stake (Punny ;)

I've already discussed the importance of having goals and the inevitable conflict that follows from that (blog post: Storytelling). But the amount of conflict depends on how high the stakes are.

Think of it this way, if you bet the price of a coffee on your sports team winning a particular match you wouldn't care as much about the outcome as if you had bet your entire rent for the month. (Not that I’m recommending that!)

For example, let's say we have a character, Rob. Rob is on a diet, he wants to lose 20 pounds before his brother's wedding. Here are two versions of the story:

Possibility A: Rob loses the 20 pounds and doesn’t have to rent a tuxedo.

Possibility B: Rob failed to lose 20 pounds and had to rent a tuxedo.

Either way, so what? Why should we care? I don't know about you, but I don't have strong feelings either way about rented tuxedos!

Possibility A': Rob loses the 20 pounds and so not only fits into his tuxedo but is able to fulfil his dream of climbing Mount Everest. Afterward, Rob starts a new blog to share his experiences, meets lots of other cool people and lives a meaningful life surrounded by those who care about him.

Possibility B': Rob fails to lose the 20 pounds and so not only has to rent a tuxedo but can’t fulfil his dream of climbing Mount Everest. Rob becomes depressed, never blogs, becomes addicted to Cheetos and dies alone.

Will Rob be able to lose the 20 pounds before the wedding and fulfil his dream to climb Mount Everest or will he fail, pay for his brother's wedding, become depressed and die alone?

That's a better story question. Obviously the example is tongue in cheek, but hopefully it illustrates the point.

As soon as Rob has something with emotional weight to lose, we begin to care more about what happens to him.

In order for this to work, though, the possible consequences of a course of action must be clear.

That's it for now! I'll try and get Part Two of this miniseries up tomorrow or the next day. I'm blogging a draft of my new book on writing, so your input on anything I write would be greatly appreciated! If you think I'm wrong about anything I say, please let me know! I enjoy discussions about writing. Thanks for reading.

[1]
I went looking for examples of stories that I didn’t think easily fit the form of a hero’s journey. For example, Pulp Fiction. Yes, Pulp Fiction is a film, but… See Note 2, below. Anyway, I came across the article, “Not Everything Is A Hero's Journey,” over at NarrativeFirst.com. (I looked for the author’s name, but couldn’t find it. My apologies. If anyone knows the author’s name please tell me and I'll add that information.)
Although I disagreed with some things in the article, I liked this part:
“There can be nothing more destructive to the world of storytelling than this compulsion for spiritual metamorphosis.
“Stories are about solving problems. Sometimes, solving those problems require the centerpiece of a story, the Main Character, to undergo a major transformation in how they see the world. Sometimes they don't. There is nothing inherently better about a story where the Main Character transforms.”
I really liked the author's style and wit. I would encourage anyone interested in this topic to read the article (I’ve listed it in Further Readings).
But, anyway. The hero can, and often does, fail to achieve his goal. One of the ways the hero can fail to achieve his goal is that he fails to transform. To my mind, though, the hero’s transformation does not guarantee success. That said, I liked the comment that stories are about solving problems. Yes! Agreed.
Also, I liked the comment, “There is nothing inherently better about a story where the Main Character transforms.” Of course, it depends on what one means by better. What is the criterion? Perhaps I’m going too far afield, but is the criterion subjective (I liked this story better than that story), or objective?
I favor the idea that there is an objective aspect to such a criterion. Let’s say we have two stories. Here’s the question: Could one story help someone live a better life than the other story? For example, if we had two identical populations, and one took the first story as a myth and the second took the second story as a myth and we ran the simulation over 1000 generations, in which population would individuals have lived more meaningful lives? And we could run this entire experiment many hundreds or thousands of times. Would one civilization be much more successful than the other? Of course, such an experiment isn’t possible.
Anyway. I do think that is why we are fascinated with stories. It’s why a character’s goals matter to us, it’s why stakes matter to us, it’s why we care about endings. But I’m open to people disagreeing. I love those sorts of conversations.
[2]
Books versus films. I regard a book as a way of carrying a story around in the world. Similarly, I regard a film strip--or these days a thumb drive containing an electronic file--as another way of carrying a story around in the world. Of course there are differences. In a book bits of ink form letters which form words and when read images unspool in the theater of the mind. In a film images are displayed on a flat surface and they flick by so quickly that our eyes and brains are fooled into seeing motion. Sure, films--flicks--generally don’t require the viewer to bring the same mental equipment to bear to unspool a story as books do but, in terms of the story told, I don’t believe there is an essential difference between the media.
Or, to put it another way, a book or film is a medium/container for a story in something like the way a body is thought to be a medium/container for a mind. It’s the story that is the essential thing, not the specific form in which it exists in the world. Or something like that. At least, that is one way of thinking about it.

Not Everything Is A Hero's Journey, over at Narrativefirst.com.