Finding the Theme of Your Story: The Vomit Draft 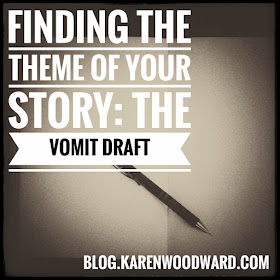 Hi! Welcome back. A short post today. I’m not being lazy, I’m working on three much longer ones, but that’s for next week. Today, I thought I might update one of my more popular older posts: 22 Ways to Tell a Great Story. But then I read tip number three and realized I needed to do a post about the virtues of writing a vomit draft/zero draft.


1. A vomit draft will show you what your story is about, it will reveal the theme


This list of 22 tips comes from the fabulously creative brain of Emma Coats who used to work for Pixar. A few of these points jumped out at me. They communicate a certain picture of how to create a story, one that I wholeheartedly and enthusiastically agree with. Here are the tweets in question:

“3. Trying for theme is important, but you won’t see what the story is actually about til you’re at the end of it. Now rewrite.”


Yes! (3) had me hopping up and down. I totally agree. This is what I’ve been saying about the advantages of a vomit draft or Zero Draft (I didn’t invent that name!).

(The Zero Draft: How To Beat Writer’s Block)

I keep a writing journal and I always write my first draft out longhand. There’s something about the motion of my hand skimming along the rough surface of the paper, the feeling of cradling the pen between my fingers, the feeling of the jaggedness of the pen’s contact with the page.

Let me try to unpack that.

I remember watching one of John Green’s videos where he discussed the writing of his marvelous and immensely popular book: The Fault in Our Stars. As you probably know, this book reached the number one spot on the New York Times Bestseller list, as well as various others. It was also TIME Magazine’s number one fiction book pick for 2012. AND it was made into a movie. It’s safe to say it was successful. I think we’d all settle for that kind of response to our work!

I mention this because John Green said -- in a YouTube video I can’t find the link to! -- that essentially nothing in his first draft made it into his final draft. It was simply a place to start from, it was something that helped him figure out what his book was about.

2. Flawed Ideas on Paper Beat Perfect Ideas in Your Head

“11. Putting it on paper lets you start fixing it. If it stays in your head, a perfect idea, you’ll never share it with anyone.”

That’s really why I’m such a big fan of writing a vomit draft, it gives you space and time to flush your ideas out of your brain and get them out into the world where they can be examined, played with. You can’t improve nothing. Start with whatever scrawled idiotic nonsensical blather you can come up with and then make it better! (And, whatever you do, NEVER show anyone your vomit draft. I like to ritually burn mine.)

“7. Come up with your ending before you figure out your middle. Seriously. Endings are hard, get yours working up front.”

Perhaps this doesn’t belong in an article about the advantages of writing a vomit draft, but IF you have a general idea about how your story ends -- you don’t have to! -- it helps. And of course your idea regarding how the story ends can change as you write. This is a vomit draft, that’s okay! There are no rules EXCEPT: just write.

And that’s it! Thanks for reading, and if you’d like to help keep this blog going head over to my Patreon page. You can donate as little as one dollar a month and have my eternal thanks as well as the knowledge that you are unconditionally awesome. Also, if you’d like to send me a story or a portion of your WIP for me to critique, head on over to my Patreon account or just contact me.


How Many Drafts Does It Take To Write A Novel?
The Zero Draft: How To Beat Writer’s Block
Pixar: 22 Ways To Tell A Great Story