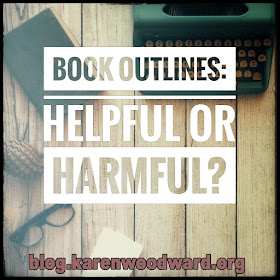 To outline or not to outline. There are few questions more contentious in the writing world -- and writers (God bless us!) can be a rather contentious bunch.

Here is my tl;dr answer: Ultimately, I think whether you should use an outline depends on the writer, and everyone is different, so there is no one definite answer. That said, I think everyone should try outlining at least once. Otherwise, how could you know whether it works for you?

Stephen King: Reject the Tyranny of the Outline


As you likely know, Stephen King doesn't like outlining. He writes:

“I’d suggest that what works for me may work equally well for you. If you are enslaved to (or intimidated by) the tiresome tyranny of the outline and the notebook filled with “Character Notes,” it may liberate you. At the very least, it will turn your mind to something more interesting than Developing the Plot.” (On Writing, Stephen King)


I think I might talk about Stephen King too much but he is one of my favorite writers. And he’s straightforward, one of the traits I appreciate most in a person. I don’t always agree with King but what he has to say is well thought out and has worked for him over the course of decades, so it’s worth taking seriously.

Stephen King is exceptionally talented. His story, ‘It’ is one of my favorites -- after I read it I couldn’t use the washroom without fear for a couple of decades (especially at night). But, on the positive side, he gave me worlds to live in, he gave me characters I love and who have stayed with me. This may seem like an odd way of putting it, but it’s true: he gave me the gift of his thoughts.


Broadly speaking, there are two ways of constructing stories:


Let’s talk about plot. In most stories the hero starts off in the Ordinary World, doing what he usually does every day. He wakes up, brushes his teeth, goes to school, wishes he was brave enough to ask Betty to the dance, gets bullied for his lunch money, etc.

This is where you show your readers your character’s soul, often by giving her a mini-adventure (think of any Bond film you’ve ever seen).

Then there’s a Call to Adventure (which is often rejected). The protagonist will be given a foreign dictator to subvert, or tasked with retrieving nuclear weapons from a sexy despot. Etc. Etc. Etc.

Often, the hero meets a mentor who gives him a gift that will aid him on his Journey into the Special World of the Adventure (Obi Wan Kenobi gave Luke the lightsaber that had belonged to his father). And so on.

There’s nothing wrong with a strongly plotted story. For one thing, it can help you determine early on whether the story works.

I wish I could remember where I read this, but years ago I read an article by Thomas Harris where he described writing his book, Red Dragon. His story emerged from what he saw his characters doing, from what he heard them saying. Psychologically, they were living, independent, entities. I think Harris is on the extreme end, he is an extreme pantser, but that’s the idea.

You don’t actually have to see and hear your characters for this technique to work! (Though it would help.)


There are innumerable ways of writing a story, and I don’t think one way is intrinsically any better than another, it all depends on the writer using it, what is best for him or her.

When I pants a story -- when I start writing with a few characters and only a couple of ideas rattling around in my head -- I’ll often first write what I like to call a vomit draft. (Sounds nice, doesn’t it! ;)

The vomit draft is just that, I vomit up thoughts, thought fragments -- whatever -- onto the page. I ignore spelling, grammar, research, facts and good taste. No one will ever see one of my vomit drafts but me, it would be like walking out of the house naked.

I use a writing journal and so I scrawl this all out longhand, and that gives me the opportunity to incorporate images out of old magazines if they … how do I describe it? Sometimes an image will pop out at me. For example, I’ll see a woman’s hairstyle and I’ll realize, Yes! That’s what the protagonist’s hair looks like, so I'll cut the image out and paste it into my writing journal. (Yes, my journals look like something out of the film 'Se7en')

When I begin writing a story I try to write the story straight through and to be as brief as possible. If I realize I have to change something at the beginning of the story (e.g., the protagonist’s hair needs to be brown rather than blond), I'll make a note of that, but I’ll keep going.

Okay, my point is that at the end of this messy process I’ll have a pretty good idea of the story, of its shape. From that I can easily put together an outline. So … am I a plotter or a pantser?


If you haven’t already found a method that works for you, for instance if you’re just starting out and wondering whether you should outline, then outline. At least try it out. Even Stephen King has tried it -- which is one reason he can confidently say it’s not for him.

An outline doesn’t have to be complicated. Just tell the story as briefly as possible and then break it up into sections. Identify the Call to Adventure, the confrontation at the Midpoint, the Final Showdown. Even if you only have those three things it can be a help. Or not.

If you find outlining doesn’t work for you, if you find you don’t need it, then fine!

As always, have a good writing day and I’ll talk to you again soon. :-)