How to Write a Book, Part Two 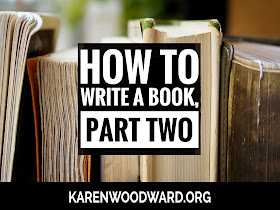 This article is part two of How to Write a Book.

2. Figure out how many words you can write a day.


As you write your Zero Draft you’ll also get an idea for how many words you can write in a day. You want to shoot for a SUSTAINABLE amount. Writing a book isn’t a sprint, it’s a marathon.

NaNoWriMo is wonderful practice for writing everyday. It doesn’t matter if you can write 50,000 words a month, but trying helps you get in touch with your inner writer and figure out your average word output.

If you can’t write every day, that’s fine! Perhaps you have an insane schedule conceived in the depths of hell and can only write once a week. That's okay! All you’re trying to do at this point is figure out how many words you can write over a certain time period.


Don’t worry if you don’t know how the story ends (the Climax) or what the middle bits are (Midpoint Crisis) or even what sets all these events in motion (the Inciting Incident). That’s what we’re going to work on now.

Take what you know about the story and:


a) Internal: build on your understanding of the story, and
b) External: shape the basic story outline so it fits the structure of your chosen genre.

Before we think any more about (a) or (b), though, let’s talk about suspense.

3a. A note about suspense.


I’m interested in writing stories that entertain. Not everyone is! And that’s fine. But I love a rousing, suspenseful, tale. Since these kind of stories are what I love to read it’s natural that they’re also what I love to write.

Another thing: It’s MUCH more difficult to sell books that aren’t entertaining. Yes, there are folks who read and enjoy stories that do not have even the faintest smidgeon of suspense—I’ve met them!—but that’s not my audience.

When I write these posts I’m writing to those who, like me, want to craft stories that entertain.


When I create an outline for a story I begin at the end.

Sounds perverse, doesn’t it?! But—especially if you’re writing something with the element of surprise—it makes sense to start with what we KNOW and then work out what needs to happen for us to get there.

For example, let’s say you know that Bob Boisterous murdered Sally Soffit with an experimental drug because Sally was going to get the promotion Bob coveted.

Means: Experimental drug
Motive: Bob wants the promotion
Opportunity: Bob says he was taping a podcast in his private studio when the murder occurred—and it seems as though he’s telling the truth.

You know Bob has to get caught which means he has to make a mistake. Let’s say Bob put the poison in Sally’s coffee. When she tasted the coffee she cringed and said, “Someone put sugar in this,” but drank it anyway because she was caffeine deprived and in a hurry.

The killer didn’t know Sally would tell anyone her coffee was too sweet or that the person she told would remember it. When the dregs of Sally’s coffee is analyzed it seems to only contain coffee because the killer switched the cups.

Our detective thinks Bob’s behavior is fishy. Bob hated Sally (and vice versa) and Bob’s grief seems false. If he had nothing to do with her death, the detective feels he wouldn’t be as intent on hiding his true feelings.

Also, the victim’s comment about the sweetness of the coffee (Sally NEVER used sugar) is enough to make our intrepid detective suspicious. Further, the detective knows of a poison that would act on the victim in a way consistent with what the coroner told him about the body.

The murderer was counting on the death being put down to natural causes—the victim had a heart condition and the effects of the poison looked like cardiac failure.

You get the idea. Everything is much easier once you know where you’re going. Because of this you can save a LOT of time.


At this point you don’t have to know every last little thing about the plot but try to have something down for the main points. Keep in mind that your outline isn’t written in stone! It can and will change as you write.

Even if your outline has gaps it helps to have the bones of the story written down. You’ll be able to see which parts are missing. A well-defined, concrete, problem is much easier to solve than a nebulous ill-defined one.

ACT ONE (25%)
(This is the Ordinary World. Describe it as you introduce your characters IN ACTION. Give them an initial problem to solve, setbacks, etc.)
Inciting Incident: What is the Inciting Incident?
Call to Adventure: What draws the protagonist into the quest?
Journey to the Special World: What mini-quest takes the protagonist from the Ordinary World into the Special World of the Adventure?

ACT THREE (76 to 100%)
(All subplots have been closed out or will soon be closed out. We’re concentrating on the hero’s quest, racing toward the finish line.)
Race to the Finish: How does the protagonist get his/her mojo back and get back on track?
Climax: What happens at the climax? Does the protagonist win and, if so, how?
Wrap up: What happens to the major characters?

You don’t need to answer these questions in any detail at this point. This will just give you the big points, the turning points.

Now we have an outline. Granted, this outline will vary depending on the kind of genre you’re writing for, but you’ve got the bare-bones done. High-five!

4. Decide how long you want your finished manuscript to be.


Now figure out how your story fits into, or onto, your outline. When I think of this step I think of pulling a dress (your story) over a mannequin (the outline).

I’m not going to fib, this step is a bit of a dark art. Let’s start by deciding how long we want the finished manuscript to be.

Let’s say you decide to shoot for around 80,000 words and use a three act structure.

Of course you might not want to use three acts, perhaps you’d prefer four or five or even six! All the major points (Inciting Incident, Call to Adventure, etc.) will be the same. Also, keep in mind that at the end of each act, a major event should occur which spins the hero’s journey (the through-line) in a different direction and increases the stakes.

As far as what happens in each act you’ll want to adapt it to the genre you’re writing in. For instance, here’s a five act structure for a murder mystery.


Congratulations! You’ve got an outline. Sure, there are gaps but you’re getting the feel for the general shape of the story, the major moments. Now let’s see what we can do about filling in the missing bits.

For example, there’s 4,000 words between the Inciting Incident and the Call to Adventure. One thing that can help get you through the gaps are scenes and sequels.

I’m putting together an example outline for Murder in Meadowmead. I’ll try to finish that up today and publish it tomorrow (Wednesday).

That’s it! I’ll talk to you again tomorrow. In the meantime, good writing!


Every post I pick something I believe in and recommend it. This serves two purposes. I want to share what I like with you, and, if you click the link and buy anything over at Amazon within the next 24 hours, they put a few cents in my tip jar at no cost to you. So, if you click the link, thank you! If not, that’s okay too. I’m thrilled and honored you’ve visited my blog and read my post.

Today I’m recommending: The Emotional Craft of Fiction: How to Write the Story Beneath the Surface, by Donald Maass. I’ve had the privilege of taking a couple of workshops from Mr. Maass. He’s terrific! If you ever have the chance to hear him speak, take it! His books are amazingly helpful. Highly recommended!


While writers might disagree over showing versus telling or plotting versus pantsing, none would argue this: If you want to write strong fiction, you must make your readers feel. The reader's experience must be an emotional journey of its own, one as involving as your characters' struggles, discoveries, and triumphs are for you.

Readers can simply read a novel...or they can experience it. The Emotional Craft of Fiction shows you how to make that happen.

Because of the number of bots leaving spam I had to prevent anonymous posting. My apologies to anyone this inconveniences, I wish I didn't have to do it. I do appreciate each and every comment.