How to Build an Interesting Character: 10 Questions 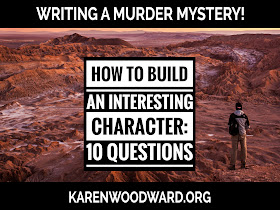 How do we create interesting characters, characters with depth and conflicting desires? Today I talk about 10 ways writers can communicate the essence of a character to readers.

I’ve gone over this before (see: Tags & Traits: Characterization And Building Empathy and 7 Tips for Creating an Interesting Detective) but what I want to talk about today is a bit different: 10 ways writers can communicate the essence of a character to readers.

But, before I get to the 10 ways, let’s take a look at direct vs indirect characterization.


In direct characterization you, the writer, tell the audience—your readers—what a character is like.

This telling can be done in a number of ways: through the narrator, through another character or through the character themselves (see Characterization)

Example: Even though Johnny was 6’3’’ tall and had flaming red hair he was rarely noticed.

Here the narrator tells us what Johnny is like. Note: The narrator could be unreliable, so even in direct narration a reader can’t just take what they read at face value.

Example: Dan said, “Hey, Sue! Have you seen Johnny? He’s tall, and with that head of red hair you’d think he’d be easy to spot. Not so much!”

Here a character in the story lets us know what Johnny is like. Generally these descriptions reflect the (possibly inaccurate) beliefs of the character who is speaking.

c. The Character Themselves

Example: I said, “Mark, I don’t understand it. All my life I’ve stood a head taller than all my friends. And I have this blazing red hair. You’d think I’d be easy to spot, but my parents lost me 63 times before I turned 9. I seem to be uniquely forgettable!”

Here the character themselves tells you the reader about what they’re like. That is, it is their INTENTION to tell you something about themselves. This isn’t necessarily so for indirect characterization.


In indirect characterization you let your audience infer what a particular character is like through ...

1. A physical description of the character.


In what follows I’m going to rely on quotations from Stephen King’s work because he is one of the authors I’ve studied the most.


This is the second paragraph in Stephen King's The Shining:


Ullman stood five-five, and when he moved, it was with the prissy speed that seems to be the exclusive domain of all small plump men. The part in his hair was exact, and his dark suit was sober but comforting. I am a man you can bring your problems to, that suit said to the paying customer. To the hired help it spoke more curtly: This had better be good, you. There was a red carnation in the lapel, perhaps so that no one on the street would mistake Stuart Ullman for the local undertaker.

This is an amazing paragraph! It not only tells us what Ullman looks like (so, strictly speaking, this is direct characterization), but INDIRECTLY the narrator tells us about Jack Torrance, about his anger, his insecurity, his feelings of inferiority. (see: Free Indirect Discourse)

How does the character dress?


Again, from THE SHINING:


The part in his hair was exact, and his dark suit was sober but comforting. I am a man you can bring your problems to, that suit said to the paying customer.

2. A psychological description of the character.


This is from Mr. Mercedes by Stephen King:


Hodges walks out of the kitchen with a can of beer in his hand, sits down in the La-Z-Boy, and puts the can down on the little table to his left, next to the gun. It’s a .38 Smith & Wesson M&P revolver, M&P standing for Military and Police. He pats it absently, the way you’d pat an old dog...

From this I understand that Hodges is the kind of man who knows how to use a gun, has used one in the past to good effect, and feels he may need to do the same in the future. Although it’s only two and a half sentences, it gives a clear vision of one element of Hodges psychology.

3. The words a character uses.


Here is something Ullman said in “The Shining.” He’s speaking to Jack:


I suspect that what happened came as a result of too much cheap whiskey, of which Grady had laid in a generous supply, unbeknownst to me, and a curious condition which the old-timers call cabin fever. Do you know the term?

A couple of things: One has the feeling Ullman doesn’t approve of whisky and especially not CHEAP whisky. Also, it seems slightly hostile—patronizingly superior—that Ullman would ask Jack (who he knows used to be a teacher) if he knew the term “cabin fever.”

Also, I know we’re going to cover this explicitly in a minute, but look at HOW Ullman talks. Like a textbook. Controlled. A teacher doling out his wisdom.

4. The WAY the character talks. Through their accent, intonation, confidence level, speech impediments, and so on.


This is from Under the Dome, by Stephen King:


“I don’t know how to describe it. I never seen anything quite like it.” Gendron paused, scratching both cheeks, drawing his already long face down so he looked a little like the screamer in that Edvard Munch painting. “Yes I have. Once. Sorta. When I brought home a couple of goldfish for my daughter’s sixth birthday. Or maybe she was seven that year. I brought em home from the pet store in a plastic bag, and that’s what this looks like—water in the bottom of a plastic bag.

Notice the short sentences, the (relatively) simple, short, words. The speech has rhythm. Also, notice the speech is intentionally not grammatical (“I never seen anything...”). It communicates an image, a definite idea, of what the speaker is like. (Ullman would never, in a 1,000 years, say anything remotely like this!)


From Misery by Stephen King:


“He lay back, looking at the ceiling, listening to the wind. He was near the top of the Great Divide in the heart of winter, he was with a woman who was not right in her head, a woman who had fed him with IV drips when he was unconscious, a woman who had an apparently never-ending supply of dope, a woman who had told no one he was here.
“These things were important, but he began to realize that something else was more important: the tide was going out again. He began to wait for the sound of her alarm clock upstairs. It would not go off for some long while yet, but it was time for him to start waiting for it to be time.
“She was crazy but he needed her.
“Oh I am in so much trouble he thought, and stared blindly up at the ceiling as the droplets of sweat began to gather on his forehead again.”

Here Paul Sheldon doesn’t DO anything terribly exciting, but through his thoughts we see his situation. We see—we FEEL—how truly desperate, truly awful, a situation he finds himself in. Here it isn’t what he does but what he doesn’t do, what he can’t do. He is the powerless captive of a mentally unbalanced woman. Not good!

But look at how Paul reacts to the realization of his dire situation. He is almost preternaturally calm. Yes, the sweat begins to bead on his forehead but part of that is because he’s in withdrawal from the opiates Annie Wilkes has been giving him.

6. What other characters say about him or her.


This is from “It” by Stephen King:


“Please, I got to talk to my mother,” Steve Dubay said for the third time. “I’ve got to get her to mellow out my stepfather, or there is going to be one hell of a punching-match when I get home.”

This short paragraph paints a grisly picture of Steve Dubay’s home life. We come to understand the violence of his father and his mother’s grudging acceptance of it, but we infer this. It’s never explicitly stated.

7. The character’s reactions to others, his or her behavior toward others.


Enough Stephen King quotes! That said, if anyone would like to send me a passage that nicely illustrates the below (it doesn’t have to be from a Stephen King novel!), please share it in a comment.


For example, if the character doesn’t feel safe visiting her family she is going to act differently than when she hangs out with her friends.


What are the character’s thoughts? Are they markedly different from what he says? Does the character lie to himself or just to others?

I know I said “No more Stephen King quotes!” but my favorite first line, ever, is from Stephen King’s The Shining: Jack Torrance thought: Officious little prick.

That sums up Jack Torrence and his anger, his bitterness. It gives us the character’s essence.

There is no right or wrong here. If what a character is feeling is consistent with how they act and what they say, fine! That communicates that the character is generally honest. A straight-shooter. But if it isn’t consistent, if she is sad or angry and not letting on, then that is conflict, and conflict is the awesome-sauce of life—at least in stories!

(Is there art on the walls? Are there antiques or is everything new? Etc.)

How does the character react to the place where they work? Do they act differently than elsewhere? If so, in what way?

Jim Butcher, author of the New York Times Best Selling series, the Dresden Files has given his wholehearted recommendation to The Fantasy Fiction Formula, by Deborah Chester. She taught him back in the day and he credits her with helping him succeed. He writes:

“So, aspiring writer, let me do you the favor I wish someone had done me. Shut up and do what Debbie tells you to do.”

I’ve read it and it’s wonderful! It’s geared toward writing either a traditional or urban fantasy, but the general structure she talks about is broadly applicable to any genre. In any case, highly recommended!