Purple Prose: What It Is and How to Exterminate It 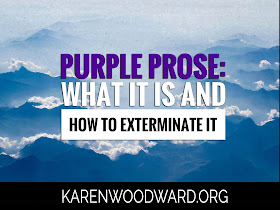 The first time I heard the term “purple prose” I was puzzled. Exactly what mistake was I being warned against. For years afterward I felt I knew purple prose when I saw it but the injunction remained frustratingly vague.

What is purple prose?


Edward Bulwer-Lytton famously began his novel “Paul Clifford,”[4] with the sentence, “It was a dark and stormy night.” As wikipedia states, this phrase “is considered to represent the archetypal example of a florid, melodramatic style of fiction writing also known as purple prose.”[1]

Of course Leonard qualified his statement by saying that “If you happen to be Barry Lopez, who has more ways to describe ice and snow than an Eskimo, you can do all the weather reporting you want.”[5]

In other words, writing about the weather is fine as long as it’s either fascinating in and of itself or if it is relevant to something in the story. One way of making weather relevant is to write about a character's reaction to it. For example, is the weather preventing the character from accomplishing her goal?

Here’s an exception to the rule: One of my favorite books growing up was A Wrinkle in Time by Madeleine L’Engle. How do you think that book begins? That’s right! “It was a dark and stormy night.” I kid you not!

Which brings us to the nub of the issue: What makes purple prose undesirable? An important clue comes from the history of the term.

The history of purple prose:


The first mention of purple prose (literally, “purple patches”) goes back all the way to the Roman poet Horace (65 to 27 BC) who wrote:

“Weighty openings and grand declarations often / Have one or two purple patches tacked on, that gleam / Far and wide...”

In Roman times purple dye was expensive and therefore purple clothing was a sign of wealth. Folks who wanted to appear to have more money than they actually did sewed patches of purple into their clothing. Horace is saying that purple patches are a sign the writer is insecure about their writing and so attempts to prop it up—attempts to make it appear better than it is—by using flowery language. (An attitude which reminds me of Stephen King's injunction against adverbs! Namely, that their overuse comes from a writer’s own insecurity. See: Killing Your Darlings.)

The characteristics of purple prose:


In my opinion, these two mistakes lie at the colorful heart of purple prose:

1. Purple prose doesn’t belong. It’s markedly more floral than the prose around it.

"[T]he sky was never quite the same shade of blue again. I mean the world looked different forever after, and even in moments of exquisite happiness there was the darkness lurking, the sense of our frailty and our hopelessness." (Anne Rice, The Vampire Lestat)

"Gaal did not carry out his promise. He was awakened the next morning by a muted buzzer. He answered it, and the voice of the desk clerk, as muted, polite and deprecating as it well might be, informed him that he was under detention at the orders of the Commission of Public Safety." (Isaac Asimov, Foundation)

So, to a certain extent, whether a particular passage is purple depends on the writer's overall style. His or her voice.

2. Purple prose is intended to distract the reader from the fact that nothing is happening in the story.


The plot isn’t moving forward, it’s stagnant. The characters aren’t pursuing their goals. As a result the story is dull and dry. The extravagance of the writing itself is the only thing driving the story forward. So, of course, it fails.


“It was a dark and stormy night; the rain fell in torrents—except at occasional intervals, when it was checked by a violent gust of wind which swept up the streets (for it is in London that our scene lies), rattling along the housetops, and fiercely agitating the scanty flame of the lamps that struggled against the darkness.” (Paul Clifford, by Edward Bulwer-Lytton)

“Grignr's emerald green orbs glared lustfully at the wallowing soldier struggling before his chestnut swirled mount. His scowling voice reverberated over the dying form in a tone of mocking mirth.” (The Eye of Argon, by Jim Thesis)

How to avoid purple prose


As we've seen, purple prose breaks the reader out of the story because it calls attention to itself. Purple prose is like a fairy tale king, dressed sumptuously giving a long flowery speech to plainly dressed commoners, a speech that holds nothing relevant to them, to their lives. His subjects would rather he just stopped speaking so they could get on with their day.

So here are 2 ways to avoid purple prose:


The advice to “kill your darlings” is, at least in part, an admonition against purple prose. Purple prose is, above and beyond anything else, unnecessary. If you removed a purple passage the story itself would not change. That’s the test.

The action of every character needs to have a goal, a purpose. It should either forward the plot or advance a character’s goal (and, really, these two are the same thing).

Eliminate adverbs whenever possible. Instead of writing, “He crossed the street quickly,” go with “He ran across the street.” They say the same thing and the second one is clearer.


Writing Excuses: Beautiful Prose, Purple Prose. As I mentioned in a previous article (6 Inspirational and Informative Writing Podcasts), I’m a big fan of podcasts, especially writing podcasts, and Writing Excuses is one of my favorites. Recently they published an episode (see link, above) all about purple prose. Highly recommended!

From the blurb: “From the Hugo Award-winning hosts of the Writing Excuses writing advice show comes a collection of all-new stories of the fantastic, with beautiful illustrations and a behind-the-scenes look at each story’s creation.”


That's it! I'll talk to you again on Friday. Until then, good writing!


1. “It was a dark and stormy night” from wikipedia.org.

2. Writers On Writing; Easy on the Adverbs, Exclamation Points and Especially Hooptedoodle, by Elmore Leonard.


5. Here's an example of prose which doesn't at first seem to have a clear purpose but which, nevertheless, drew me in: "When I think of my wife, I always think of her head. The shape of it, to begin with. The very first time I saw her, it was the back of the head I saw, and there was something lovely about it, the angles of it. Like a shiny, hard corn kernel or a riverbed fossil. She had what the Victorians would call a finely shaped head. You could imagine the skull quite easily." (Gone Girl, by Gillian Flynn)