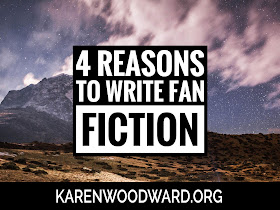 “Fan fiction, for many people, is ... a gateway drug to all other fiction writing.”
—Emma Lord

Before Amazon came out with Kindle Worlds I never seriously thought about trying my hand at writing fan fiction. This blog post was inspired by a podcast I listened to a couple of days ago: NPR 1a: Fans And Fan Fiction (I've also embedded the podcast, below). It got me wondering: can fan fiction help writers hone their skill and, if so, how?

We’ve all heard of fan fiction, or fanfic. Fan fiction is just what it sounds like, fiction written in an established universe which features characters and settings from that universe.

But, why write fan fiction?

You love a particular narrative world and there are stories you’d like to read which aren’t being written.

Have you ever wanted characters to do something that you know can’t happen on the show? For example, you want to tell a story about the main character’s death or you would like two characters (possibly the protagonist and antagonist!) to begin a romantic relationship. Or perhaps the stories being spun in a particular universe are strictly PG and you want to take things in a more NC-17 direction.

You might love a particular story but hate the ending. For example, I’ve always LOVED Bram Stokers Dracula. If any of you haven’t read the original, please do. But I’ve never been a fan of the ending. I’ve always wanted to take Stoker’s story, put it in a modern setting, and—while  leaving the beginning more or less the same, change the ending.

3. The series is finished.

No more shows are being produced, no more books are being written. The only way you’re going to get a new story is if you write one.

You want to mash two narrative worlds together. For instance, Buffy wakes up in Mordor and takes on Sauron.

The Advantages of Writing Fan Fiction

Writing fanfic has definite advantages for new writers—I wish I had written fanfic when I was a kid; I think most of my stories would have been set in C.S. Lewis’s Narnia!

Another advantage for new writers is that they don’t have to create everything—the characters, the world—from scratch. They can work with fully developed characters that work and they can draw from LOTS of examples. It’s a bit like being an apprentice writer.

That said, I don’t mean to suggest fanfic is ONLY for new writers!

The Rhythm of Story

Just today I was listening to an interview with one of Stephen King’s children, Joe Hill (10 Minute Writer's Workshop: Workshop 18: Joe Hill). He mentioned a time when he was blocked. To push through he wrote out, longhand, great chunks of a story by one of his favorite authors. It helped him internalize those story rhythms. (Incidentally, several best selling authors have also given this very same advice; it’s what they did at the beginning of their careers.) I think fanfic can help writers in a similar way. By trying to write in the same voice (or a similar one) as a more experienced writer we can internalize the rhythms of successful storytelling.

Established characters generally have well-defined tags and traits and seasoned writers deftly weave them into character introductions and reintroductions. This, however, is one of the things it is sometimes difficult for a beginner to pick up, even though it's one of the most important. There are several TV shows that do this exceptionally well. In my opinion, one of the best shows for this is Archer (<-- NSFW). That show continually amazes me! See also: The Simpsons, Bob’s Burgers, Buffy the Vampire Slayer, and Supernatural.

Watch or rewatch an episode of one of these shows and pay attention to how the characters are introduced, how tags and traits are used to define the characters and hook viewers, as well as how they hook into the story arc for that season. Also (and this isn’t specific to tags and traits) notice how these shows get right to the inciting incident with minimal preamble.

Where to publish fan fiction?

The legalities are beyond me but if you would like to read about this I suggest the wikipedia article on Fan Fiction.

It seems as though copyright holders will not prosecute if a work of fan fiction is published on a site devoted to that purpose, for example fanfiction.net.

In the case of commercial fiction things are much different. Generally speaking, without some sort of prior understanding between you and the copyright holder, one cannot write in another author’s universe and get financial remuneration. But some authors do allow others to write in one of their fictional worlds AND receive compensation for their efforts.

For instance, Kindle Worlds offers writers a place to publish fan fiction inspired by popular books, shows, movies, comics, music, and games. Of course there are conditions and restrictions which you can read about here.

Voice. If your goal is to write in the voice of the original author then you must get the atmosphere right. In this context Ian Sansom’s positive review of The House of Silk (a Sherlock Holmes novel) might be of interest: The House of Silk by Anthony Horowitz.

For example, in the 1992 retelling of Bram Stoker’s Dracula on the big screen, Lucy was depicted as more sexually inquisitive than in the book. Even so, she was recognizably Lucy. I’m not suggesting that each character has a core set of characteristics that any fan fiction must adopt—I rather doubt this—but that’s part of what makes writing a deliciously dark art. Keep in mind that IMHO no matter what you do, no matter what decisions you make in writing (as in life), there are going to be folks who vehemently disagree with you.

Fanfiction.net. This is a huge site that serves the interests of a vibrant community. If you’re at all interested in writing fan fiction I encourage you to wander down its highways and byways.

The Writers’ Area. This is a master list of miscellaneous resources devoted to fan fiction.

Harry Potter Fanfic Resources. There are many sites devoted to all things Harry Potter and this is by no means the only fan fiction resource for that universe but it’s a place to start.

Today I’m wholeheartedly recommending The Fantasy Fiction Formula, by Deborah Chester. DC taught Jim Butcher in university and he dedicated his first book, Storm Front, to her. I’ve read DC's blog for years and love it!

From the blurb: “There's more to writing a successful fantasy story than building a unique world or inventing new magic. How exactly is a plot put together? How do you know if your idea will support an entire novel? How do you grab reader attention and keep it? How do you create dynamic, multi-dimensional characters? What is viewpoint and do you handle it differently in urban fantasy than in traditional epics? What should you do if you're lost in the middle? How do you make your plot end up where you intend it to go? / From the writing of strong, action-packed scenes to the handling of emotions, let award-winning fantasy author Deborah Chester guide you through the process of putting a book together.”


I’m curious, do you write fan fiction? If so, when did you start? Do you also write original fiction? What do you love most about writing fan fiction? Is there anything you don't like about it? I’d love it if you posted your comment for all to read but if you don’t feel comfortable doing that, you can also contact me directly. I’d love to hear about your experiences!