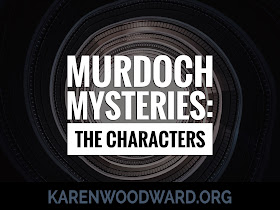 I love Murdoch Mysteries. I’ve watched the entire series, twice! It's a terrific series and enormously popular in Canada and the UK. My question: Why? What is it about this series that has not only captivated me but millions of others.

That's what I'm going to try and puzzle out in this mini-series. Today I'll talk about the characters and in my next post I'll dissect the structure of an episode.


Have you heard of Frank Gruber? Gruber once bragged that he could write “a complete mystery novel in 16 days”![1]

Gruber was a prolific writer in the age of Pulp. He wrote “more than 300 stories for over 40 pulp magazines, as well as more than sixty novels, which ... sold more than ninety million copies in 24 countries, sixty five screenplays, and a hundred television scripts. Twenty five of his books have sold to motion pictures, and he created three TV series...”[1]

Why I mention Gruber here is that he wrote a terrific article that The Thrilling Detective has reproduced, one that I think can help us when talking about murder mysteries and characterization.


While the detective isn’t always a hero he tends to be, especially in English Murder Mysteries. Gruber writes:

“THE HERO. A hero must be colorful. He must have an occupation that is colorful or he must be a colorful person. In general, I have followed the theory that a regular policeman or detective is not colorful. Just think a moment about the greatest detective in all detective fiction - Sherlock Holmes - and you will quickly grasp what I mean by colorful.”[2]


Let’s take a look at Detective William Murdoch. What are his traits?


Murdoch invents forensic techniques and gadgets that are echoes of common technologies that exist today. He then uses his inventions them to solve cases.

Pro: Because of Murdoch’s use of these techniques he is able to solve crimes no one else can.
Con: His unconventional  methods open him to the ridicule of his peers.


Now for the questions:

a. Does William Murdoch have a colorful occupation?


Is a police detective colorful? I think so! It’s certainly an interesting profession to a number of people. Think of how many shows have been wildly, insanely, popular and that had detectives as their main characters (CSI, Law & Order, etc., etc.)

b. Is William Murdoch a colorful person?


NO! Decidedly not. He is the sensible one, the one who never (or practically never) loses his temper. He is self-controlled, logical. But this gives the other characters a blank—or bland!—canvas to bounce off of. Drabness, Mildness, is Murdoch’s thing!

Murdoch's very drabness, sets him apart from everyone else. It’s not just drabness, mildness, but EXAGGERATED drabness. And, as such, it is, in its own way, colorful.


FOIL. The sidekick is also called a helper and is often a foil for the protagonist, someone who emphasizes the detective's exceptional qualities by having contrasting ones. For example, Watson’s more ordinary mind provides a nice contrast with Sherlock’s brilliant one, just as Watson’s grasp of social niceties contrasted with Sherlock’s complete ignorance.

SUPPLIES A CRITICAL CLUE. Often the sidekick will supply the detective with the thought, the clue, the idea, that makes everything clear. Usually this is something that seems to be completely unrelated to the case, but it sparks something in the sleuth, he makes a critical connection he wouldn’t have done if he hadn’t heard it.[4]


How does this tie in with George Crabtree? Let’s see:


The relationship character, generally speaking, carries the theme of the story. Here’s what Gruber says about theme:

“THEME. This, to me, is the most important element of any mystery story plot. By theme I mean subject matter, what the story is about in addition to, over and above, the ACTUAL MURDER plot. To illustrate:

“‘Death and the Main’ is about fighting cocks. I give a reasonably inside account of how gamecocks are raised, how they are fought, etc. This is knowledge not possessed by the average reader and believe me, I did not know it until I read up on the subject, for the purpose of this story.

“My book, The Lock & the Key, was about locksmiths. A liberal education in making locks and keys was thrown into the murder plot. I knew absolutely nothing about locks and keys until I did research on the subject. I know no more than is in the book.

“If you have ever read Dorothy Sayers' excellent English mysteries, you will find that THEME figures superbly. In The Nine Tailors, the reader learns all about church bells, the art of bell-ringing, etc. In Murder Must Advertise, Miss Sayers discusses advertising in all its phases.

“HOWEVER . . . knowledge of a subject should be used sparingly. The mystery reader may not be as interested in the subject as you are.”


How can we apply what Gruber says about theme to Julia? To answer this, first, let’s look at a few of the good doctor’s defining traits.


Julia’s function in the story is to help Murdoch solve the case by giving him information about the victim,  about the manner of his/her death, about what the victim was like in life—whether they had children, their age, how long it took them to die, relative fitness level, what they’d eaten, and so on.

Further, she is a nice contrast to Murdoch. She is often (in the best possible way) a complication, something that upsets the orderliness of his life. Something that makes him stretch himself as a person (e.g., because of Julia, Murdoch took dancing lessons! As did Julia herself.).

“VILLAIN. Let's face it, the hero of detective fiction is a Superman. The villain must therefore be a super-Superman or have plenty of assistants. The odds must ALWAYS be against the hero.”[1]


Who the murderer is will, of course, vary from episode to episode, though there are commonalities between all, or at least most, of them.


How to Write a Mystery, by Larry Beinhart.

I first read this book YEARS ago and it’s great! Larry Beinhart talks about narrative drive, plotting, openings, scene construction, hooks, all the good stuff! Although Beinhart has written quite a bit he is perhaps best known for his book American Hero which was adapted into the film Wag the Dog.


All right! This post is only the beginning. On Wednesday I’ll go over the structure of a Murdock Mysteries episode.