The Tropes of Supernatural 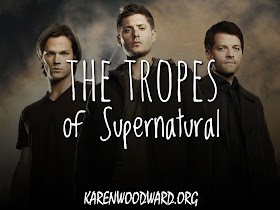 I have a confession: I’m a super-fan of Supernatural. I’ve rewatched the entire series—twice! Each time something new would pop; I’d get a fresh insight into the rhythm, the patterns, the complex web of conflicting character desires.

“an American fantasy horror television series created by Eric Kripke. It was first broadcast on September 13, 2005, on The WB .... Starring Jared Padalecki as Sam Winchester and Jensen Ackles as Dean Winchester, the series follows the two brothers as they hunt demons, ghosts, monsters, and other supernatural beings. (Supernatural, Wikipedia)”


I’ve watched Supernatural from the very first episode way back in 2005. So, in honor of supernatural's upcoming 13th season, I thought I'd take a look at the tropes used in the show.

About tropes: The way I see it, just because a show uses tropes doesn’t mean it’s bad. It all depends on how the tropes are written.

Monster of the Week


A Monster of the Week story is one in which “characters fight a villain and the whole story is wrapped up at the end, never to be dealt with again.”

Cool fact: Did you know that the phrase, “Monster of the Week” comes from the writing staff of the Outer Limits (1963)?


This is one of my favorite tropes! From TVTropes:

“Footloose and fancy-free, we set off among the Adventure Towns, seeking the next place, rather than our fortunes. / ... The character has no home (or he/she/it in progress of finding one), no job, no money, no identification, no friends, and no visible means of support, yet is always healthy, well-fed, clean, and welcome wherever he goes.”

“When one is forced to walk the earth against one's will, this trope becomes the much darker Flying Dutchman. / If a character walking the earth has a strict code of honor and spreads justice in his wake, he's a Knight Errant. Same code of honor (and wanderlust) usually results in passing the ‘Leave Your Quest’ Test.”

- Doctor Who
- The Fugitive
- Hercules: The Legendary Journeys


A Myth Arc is basically a story arc—often a very LONG one. In the case of Supernatural the Myth Arc encompasses a soon-to-be 13 seasons of the show!

Cool fact: “Myth Arc” and “mythology episode” originated with the writers on the X-Files!


Every post I pick a book or audiobook I love and recommend it. This serves two purposes. I want to share what I’ve loved with you, and, if you click the link and buy anything over at Amazon within the next 24 hours, Amazon puts a few cents in my tip jar at no cost to you. So, if you click the link, thank you! If not, that’s okay too. I’m thrilled and honored you’ve visited my blog and read my post.

Today I’m recommending Writing a Novel with Scrivener, by David Hewson. I use Scrivener to write everything, including these posts!

From the blurb: Bestselling “author David Hewson, creator of the successful Nic Costa series, offers a personal, highly-focussed guide to using this powerful application to create a novel. .... Hewson, a Scrivener user for years who's written five of his popular novels in the app, takes users through the basic processes of structuring a full-length novel, writing and developing the story, then delivering it either as a manuscript for an agent or publisher or as an ebook direct to Kindle or iBook.”


And that barely scratches the surface! If you want to look at more tropey goodness:

- Character profiles from the Tabletop Game: Monster of the Week. Here’s another list. Lots of great character ideas!

That’s it! I’ll talk to you again on Monday. Till then, good writing.