How To Write A Cosy Mystery: The Sleuth 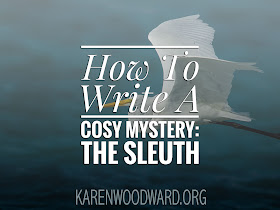 I’ve written about the difficulty I used to have writing mystery stories, something a number of you empathized with. At the time I thought it was odd I couldn’t write a mystery since I’ve read them all my life.

The other day I realized most of the mystery stories I had been reading during that time were written before I was born. I think that's one reason I had such trouble writing a contemporary mystery—I was out of step with today's readers. To fix this I ended up taking my own advice (see: How To Tailor A Story To Readers) and read a number of contemporary mysteries.

I chose cozy mysteries and selected 4 popular authors, buying one book from each author. Each book had a rank of less than 5134.

To give you an idea what that means, according to the Kindle Best Seller Calculator, a book with a rank of 5133 sells about 32 books a day. Not bad! Sure, if the author is charging a dollar for the book they’re only receiving about 35 cents in royalties but that’s still $11.00 per day or $330 per month. That’s a bill payment! [2]

So let’s take a look at the characteristics of a modern cosy focusing on the sleuth.


The Sleuth Is An Amateur


The sleuth is, generally speaking, not a professional investigator. She may be, for example, a party coordinator, a mystery writer, a bookstore owner, a caterer, a librarian, but she’s generally not a police detective, coroner, medical examiner, private detective or even newspaper reporter.

As we will see, the sleuth often owns her own small business, one that brings her into close contact with her fellow townspeople.

The Sleuth Has A Connection To The Police


Because the sleuth is an amateur it comes in handy for her to have a connection to a professional like a police detective. Perhaps the sleuth’s boyfriend is a detective, or one of her in-laws. If it’s a small town and your sleuth runs the local bakery then you could always just have the detective come in for a coffee and sweet pastry every morning.

The Sleuth Is Likable


The sleuth is usually unambiguously good. They are no antiheroes in a cosy mystery!

As soon as I wrote that I thought of Sherlock. Of course Sherlock isn't a cosy! But still. It’s a quintessential British mystery. I would argue that even though Sherlock defines himself as a high-functioning sociopath that he is both good and (for the reader at least!) likable. Why?


What does the sleuth investigate? Three things: the crime scene, the suspects and the clues.

Although the murder itself is often done offstage, the sleuth should investigate the scene of the crime. Generally this means going there and taking a look. Since she’s not a professional and, really, has no legitimate reason to be there, this can take a bit of creativity. Which may be why the sleuth often finds the body! Problem solved.

Much less common, the sleuth learns about the crime scene through intermediaries—for instance, she might not have been on the case when the first murder occurred and so must talk to the detectives who were there, study their notes and so on.

(I’ll cover the suspects and the clues in a later post.)


The Sleuth, being an amateur, needs a reason to investigate the crime. Perhaps this is why—at least in the books I’ve read—the first victim is often found either on the sleuth’s property or nearby.

Another possibility is to isolate everyone in the story so that characters can be pressed into different roles. For instance ...


The Sleuth As Character


The sleuth is, of course, the protagonist so the same pointers apply here that apply for any protagonist. When the sleuth is introduced, answer as many of the following as you can:


Tropes aren't necessarily bad, it just depends on how reflectively they're used.


In most of the cosy mysteries I've read the sleuth has moved from a big city back to the small town they grew up in.

Disastrous romantic relationship in the backstory.


Often the sleuth has had a disastrous romantic relationship in the city and this is part of the reason she moves back to her hometown. Sometimes the significant other comes to visit the sleuth and this becomes a subplot.

The sleuth becomes the owner of a small business and struggles financially.


Very often the sleuth owns some sort of business that brings them into regular contact with townspeople. Sometimes she has inherited the business from a family member such as a parent or grandparent.

Today I'm recommending Writing Deep Scenes: Plotting Your Story Through Action, Emotion, and Theme by Martha Alderson and Jordan Rosenfeld sold by Writer's Digest. From the blurb: "Writing Deep Scenes teaches you how to write strong, layered, and engaging scenes—the secret to memorable, page-turning plots. It's filled with practical tools for building layers and nuance into your scenes, employing the right scene types at the right junctures, and developing a profound understanding of how plot and scene intertwine."


This article drew from material in the following articles:


1. How To Write A Murder Mystery, by Lee Goldberg.

2. I’m NOT saying that if you choose to write a cosy that you will meet with similar success! I know you know that, but I thought I’d better say it anyway. :-)
Karen Woodward at 12:54:00 PM
Share