How to Begin Writing Your First Screenplay 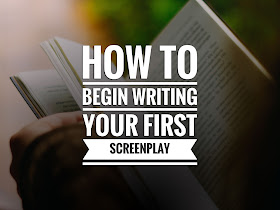 I’ve never written a screenplay so I’ve decided—even though I don’t plan on branching out into screenwriting—to rewrite one of my stories as one. Just for practice because I think that stretching myself, my abilities, is a good thing!


1. The Logline or One-Line


I’ve written an article about this (See: Creating A Logline). Basically, a logline is a sentence that spells out in dramatic fashion the central conflict of a story.

The central conflict is composed of three things:

Here is a formula:


An example logline for Die Hard:


Headstrong NYPD detective John McClane wants to save his estranged wife and her colleagues from certain death at the hands of Hans Gruber, a mercenary willing to sacrifice anything to get his hands on $640 million in bearer bonds.


Joe Bunting over at The Write Practice wrote an article about how to write a screenplay. He gives the following tip on how to craft your logline:

“It’s also helpful to put a summarizing adjective in front of your characters to give a sense of their personalities.”[1]


Here’s his example: “A headlong orphan and his Vulcan nemesis must save the Federation (and themselves) from revenge-seeking Romulan from the future.”[1]


After the logline it’s time to hammer out the beats in the beat sheet.

Example of a beat sheet: The Winter Soldier.


Description of what should be in a beat sheet:


1. Opening Image. Give a brief description of who the protagonist is before his world changes.

2. Inciting Incident/Catalyst. Protagonist is thrown out of her familiar world—the Ordinary World—and she begins her quest.

3. Start of Act Two. Protagonist is first challenged by new things. There must be drama. It must be clear whether the protagonist succeeded or failed.

5. Bad guys close in. Often there is a ticking clock involved.

6. All is lost/Dark moment. Lowest part of your characters’s story.
The dark moment or dark turn does against what hero believed in the thesis world. Act Three is the synthesis world.
Finally reaching the tower where the princess is being kept, the hero finds… she’s not there! And not only that, it’s a trap! It looks like the Bad Guy has won.

8. Epiphany. Things turn around. “Step 4: The hero now has to come up with a new plan. And it’s all part and parcel of the overall transformation of the hero and his need to “dig deep down” to find that last ounce of strength (i.e., faith in an unseen power) to win the day.”

9. Race to the finish. A plan is formulated.
“Thinking on the fly, and discovering his best self, the hero executes the new plan.”

10. The Climax. The protagonist and antagonst square off. This is the final confrontation between them. It must be clear that the outcome of this context will be final. No do-overs.

11. Wrap Up: Cash out the stakes. Tie up any loose threads.


A synopsis doesn’t include subplots or minor characters. It is only about the main character and his/her plotline.

Capitalize the names of characters the first time they appear. Also, the synopsis should we written in the third person, present tense.

Rather than create an example of my own, I’ve found an article that includes a wonderful example so head on over to Publishing Crawl and read How To Write a 1-Page Synopsis.

Today I would like to recommend a book I’ve read through many times, I’m talking about 1,000 Awesome Writing Prompts by Ryan Andrew Kinder. I’ve used many of his prompts as writing exercises to begin my writing day.


I haven’t talked about how to write a screenplay per se, this post is already long enough. I’ll save that for next time.

That’s it for today! I’ll talk to you on Friday. Till then, good writing!