Blake Snyder and the Six Things that Need Fixing 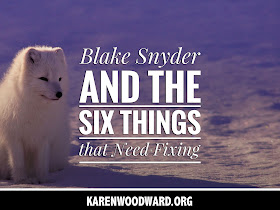 In Save the Cat, Blake Snyder writes:

“The first 10 pages is also where we start to plant every character tic, exhibit every behavior that needs to be addressed later on, and show how and why the hero will need to change in order to win. She's an isolated writer who lives in a make-believe world (Romancing the Stone); he's a hip, slick, and savvy foreign-car importer who's as glib as he is cold (Rain Man); she's a ditzy airhead who doesn't appear to have much substance (Legally Blonde).

“And when there's something that our hero wants or is lacking, this is the place to stick the Six Things That Need Fixing. This is my phrase, six is an arbitrary number, that stands for the laundry list you must show — repeat SHOW — the audience of what is missing in the hero's life. Like little time bombs, these Six Things That Need Fixing, these character tics and flaws, will be exploded later in the script, turned on their heads and cured. They will become running gags and call-backs. We, the audience, must know why they're being called back! Look at Big and its primary set-up: "You have to be this tall to go on this ride." On the list of Six Things That Need Fixing there are other needs besides a height requirement. The kid in Big can't get the girl, have any privacy, etc. But in Act Two he gets all those things when he magically turns Big. And those call-backs only work because we have seen them in the set-up.”


I had heard about this idea of Things that Need Fixing before I read Save the Cat—Dwight V. Swain talks about tags and traits in his book Techniques of the Selling Writer—but I like the way Blake Snyder spells it out.

A Thing that Needs Fixing

(If you're unfamiliar with a three act structure, see: A Story Structure in Three Acts.)

Let’s look at each of these in turn:

1. A tag or trait the protagonist has and wants fixed.


Blake Snyder mentions Big and that movie does contain terrific examples. The protagonist wants to be taller, wants to be able to talk to girls, wants to have privacy, and so on. During the course of the movie he has each of these desires fulfilled but things don’t turn out quite they way he thought they would. The end result of experiencing these changes is, toward the end of the movie, a renewed appreciation for being a kid.

2. A tag or trait the protagonist doesn’t have but wishes he did.


In The Matrix Neo wants to meet Morpheus and learn the truth about The Matrix. Throughout the rest of the movie Neo has this wish fulfilled on various levels. At the Lock-In he learns, physically, what The Matrix is—it spews his physical body out and, in the process, nearly kills him. At the next level Neo enters The Matrix and learns, in a limited fashion, how to control it. Then, at the end of the movie, Neo transcends the matrix and can alter it in any way he wishes.

3. Something that needs to be shown in Act One and then ...


When the protagonist—or any main character for that matter—is introduced, they are introduced doing something (even if this is just talking to someone), they are introduced with some sort of initial goal, and we give them tags and traits. In this opening scene we somehow manage to show the audience, get them to understand, the protagonist’s deep desires. (Generally a main character will have an internal and external desire, but one will take precedence over the other in the plot.)

4. Used as a running gag or call-back in acts two and three.


In Raiders of the Lost Ark, Indiana Jones is afraid of snakes. It’s a character tic, and it’s called back in Act Two when he’s thrown into the Well of Souls along with a few hundred snakes.


Continuing from the last point, Indy’s fear of snakes is never (to my knowledge) resolved, but I wouldn’t want it to be! It is a minor weakness in an otherwise courageous character, something that makes him more human. In Big, though, the protagonist realizes that, despite all the things that irritated him about being a kid, he wants to go back. Now, because of his adventure, he sees himself in a new light.


Every post I pick a book or audiobook I love and recommend it. This serves two purposes. I want to share what I’ve loved with you, and, if you click the link and buy anything over at Amazon within the next 24 hours, Amazon puts a few cents in my tip jar at no cost to you. So, if you click the link, thank you! If not, that’s okay too. I’m thrilled and honored you’ve visited my blog and read my post.

Today I’m recommending the beautiful Moleskine Classic Notebook. I’ve written before about how I write my Zero Drafts in longhand. I know this won’t work for everyone, but I find that ideas come to life easier when I have a pen in my hand and write longhand (see: The Benefits of Handwriting). Of course a Moleskine notebook isn’t a requirement for that! But if you want to treat yourself I can wholeheartedly recommend this journal. I buy myself a Moleskine if I’m celebrating something, or treating myself for reaching a long anticipated milestone.


That’s it! I hope you have have very merry and safe Happy New Year! I’ll talk to you again on Monday. In the meantime, good writing! :-)