The Structure of a Murder Mystery 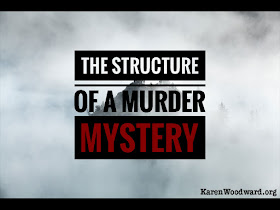 I’ve written many stories in many genres but, until recently, I’d never finished writing a murder mystery. Which is odd given that I absolutely LOVE murder mysteries.

I’ve often wondered why I had this particular disconnect. Here’s what I think:

In writing there's 'head smarts' and what I think of as ' heart smarts.' When we write a zero draft we draw from our heart smarts. This means that, no matter how much we know about story structure, that's not what guides us when we write. (It's what guides us when we edit.) And if we try to impose some sort of structure (head) on our words in the creative moment (heart), it can block those words.

Of course we should still make sure our stories are properly structured! But I think it's best to leave that for the first draft.

Elisabeth S. Craig's Take on The Structure of a Mystery


I love Elizabeth S. Craig’s blog—Mystery Writing is Murder. What a great title! Elizabeth Craig is a bestselling mystery writer. When I started reading her blog years ago she was published by Penguin but is now a "hybrid author" which just means she is both traditionally (Quilt or Innocence) and indie published (Myrtle Clover Cozy Mysteries).

Much of what I say, blow, is inspired by her post, “Pre-Writing.” I encourage you to head over to Elizabeth Craig's blog read her article for yourself.

In any case, in what follows I study EC's structure for a cozy mystery in the hope that we can use it to write better mysteries!

A Mystery Structure in Three Acts


I've attempted to keep close to EC's article, though I have included some information drawn from the many mysteries I've devoured read.

Act One: The Ordinary World


Introduce all your characters starting with the sleuth. EC writes: It’s “best to start out with [the] sleuth so that [the] reader knows who to identify with right away.”


You have two choices here:

(b) Introduce a body.

3. Call To Adventure & Acceptance of the Call


If the sleuth isn’t part of the police force then they have to get pulled into the case somehow. A friend has to beg them to become involved, or perhaps the person who died was someone they cared deeply about, or perhaps the sleuth is a suspect, or ... You get the idea.

Act Two: The Special World of the Adventure


A number of things happen here:


In my experience as an avid reader of murder mysteries, I've found that the midpoint primarily does two things. First, it introduces new information—information that changes the detective's view of the Special World of the Adventure. Second, the detective goes from being passive (or reactive) to active. Let's look at each of these in turn.

The new information can be anything that transforms the detective's understanding of the case, raises the stakes, increases the urgency and, in so doing, pushes the story forward.

Passive (or Reactive) to Active


Whatever happens at the midpoint, it puts the sleuth back to square one. The sleuth has to re-evaluate the previous evidence in light of the new information. This means going back and talking to many of the suspects again.

EC writes, “Give suspects [the] opportunity to refute [the] evidence pointing to them from the previous murder.” See (4) above.

It could also be that the sleuth is personally affected by the previous death, or by the information revealed at the midpoint. The victim could have been a close friend or perhaps someone who was an exceptionally good person and an enormous loss to the community. Of course, it could be anything. Let your imagination be your guide.


This is what I think of as the lightbulb moment. The sleuth has an epiphany, puts two and two together, something sparks a revelation, etc. But the sleuth has to confirm it. He/she has to be sure.


Put the sleuth in danger. Increase the tension, increase the stakes.

Eventually, though, the sleuth will turn the tables on the murderer and bring him/her to justice.


This is the denouement. The sleuth draws the curtain back and, clue by clue, explains how he/she solved the mystery.

ESC writes, “Are there other components in the story? Of course. But this is the basic structure of a mystery, just as other genres have their own skeletons.”


Before you sit down to write your zero draft, think about:


How many suspects should you have? The suspects are going to be characters who have a reason, a motive, to want the victim dead. In ESC’s example she lists five suspects: the niece, daughter, son, husband and friend.

Did the victim have a lot of money that his/her family and friends had a lively expectation of inheriting?

Did the victim use their money and power to manipulate others? If so, who?

That’s it! I hope you have a great, productive, weekend. I’ll talk to you again on Monday. In the meantime, good writing!

Today I'm recommending, Fall to Pieces (A Southern Quilting Mystery Book 7), by Elizabeth Craig. From the blurb: "Dappled Hills quilters are eagerly anticipating new events at the Patchwork Cottage quilt shop. The shop’s owner, Posy, has announced ‘Sew and Tell’ socials and a mystery quilt group project. But one day, instead of emailed quilt instructions, the quilters receive a disturbing message about a fellow quilter. When that quilter mysteriously meets her maker, Beatrice decides to use her sleuthing skills to find the killer before more lives are cut short."