6 Scenes Any Love Story Must Have 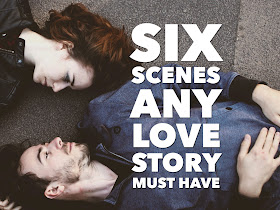 What follows is a general structure for any love story. I can't claim credit for this. I’ve begun listening to the Story Grid, a podcast put together by editor Shawn Coyne and book marketer Tim Grahl.

You all know how interested I am in Story Structure. Well! The other day Shawn Coyne went over the basic structure of a love story. What follows has been taken from these two podcast episodes:

The Most Important Genre
How to Write a Great Love Story

Some of the examples, below, are mine and I do, occasionally, draw from my own knowledge of romance books. But the structure itself (unless indicated otherwise) is all Shawn Coyne's.

What Is A Love Story?


For our purposes, a love story is a romance combined with the possibility of physical intimacy. In a love story, "The protagonist pursues or runs away from an intimate bond with another human being." (The Story Grid)

The object of the protagonist's desire: an intimate relationship.


Obsession stories are driven by issues revolving around desire.


Question: Will Jan and Adam’s twisted passion for each other lead to ruin?

At the beginning of the story the lovers despise each other but are also profoundly attracted to each other.

At the end of the story one or both of the lovers are dead.


Courtship stories are driven by issues revolving around commitment. The overwhelming majority of love stories fall into this category.


Question: Will Jan and Adam commit to each other?

At the beginning of the story Jan and Adam may or may not be dating, but (this is the important point) they haven’t made any sort of commitment to each other.

At the end of the story the lovers have committed to each other and their relationship.

There are two kinds of courtship stories: romantic comedies and dramas.


Intimacy stories are driven by issues revolving around truthfulness and faithfulness.


Question: Will Jan and Adam remain faithful to each other?

Judging from my own experience reading romances, I believe Intimacy Stories generally, though not always, have happy endings.

Six Scenes Any Love Story Must Have


In what follows I use a three act story structure. If you would like to read more about this sort of story structure I’ve written an article: A Story Structure in Three Acts.


This is just what it sounds like. The two main characters meet for the first time.

Before Jan and Adam meet the reader needs to have a good feeling for who the character is. So, for instance, if we are experiencing this story through Jan’s point of view, we would want to know what her main desire is (apart from finding someone to love!) as well as the obstacle to her fulfilling this desire. It would also be nice to know her biggest strength as well as at least one weakness.

Character creation is more complex than that, but I think readers need to have a hint, know at least these things, before Jan meets Adam. That said, readers don’t have to know all this about Adam before they meet, they can learn about him as Jan herself does.

Structure: In many of the stories I’ve read, the lovers first meeting is often the Inciting Incident.


On The Big Bang Theory, when Leonard told Penny he loved her, she broke up with him. She wasn’t ready for commitment; at least, not with him.

In some of the romance books I’ve read the event that breaks the lovers apart isn’t a confession of love.  Instead it is (what is perceived as) an inherent incompatibility.

For example, imagine Jan is a university student and Adam is a lonely billionaire. Adam’s friend, Martha, discovers Adam and Jan are lovers and, jealous, she lies to Jan about Adam. Jan naively believes Martha and breaks up with Adam.

Structure: In many of the stories I’ve read, the confession of love occurs at the end of the first act.


It doesn’t have to be a kiss! In most of the romance books I’ve read the couple takes their relationship to the next level at the Midpoint. For some couples this might mean handholding, or a kiss, for others it could mean physical intimacy.

Structure: the First Kiss event occurs at the Midpoint.


Forces the lovers have no control over push them apart. This breakup seems final.

One of Adam’s friends, Skyler, is killed and suspicion falls on Adam. Adam believes Jan is the killer and Jan believes Adam is. Adam doesn’t turn Jan in but decides he can’t have a cold-blooded murderer as the mother of his children and so breaks up with Jan.

Structure: This event occurs at the All Hope is Lost point about three quarters of the way through the second act.


Even though Jan realizes she has lost Adam, that there’s no longer any hope they could be together, she sacrifices something for him so that he can get what he cares about the most, so that he can fulfill his desire.

Jan thinks Adam is the killer and Adam thinks Jan is. Jan goes to the police and confesses to a crime she didn’t commit in order to set Adam free. Adam has a family, he has a future. She doesn’t.

Structure: The Proof of Love scene happens about half-way through the third act.

The lovers uncover the lies told to them as well as the lies they've told themselves. Since this was what was keeping them apart, they reunite happier and more committed than ever.

Adam discovers Sue couldn’t possibly have done the crime and realizes she confessed to spare him. He rushes to Sue and begs her to take him back. She does. The End.

Structure: This occurs at the Climax.


There needs to be a rival for the protagonist’s romantic intentions.

b. Helpers vs Harmers


The External Need acts as an engine, an impetus, that brings the two characters together.

For example, in Jane Austen’s Pride and Prejudice Jane and her sisters must marry before her father dies because, on his death, the house and income associated with it will go to a cousin. As a result the girls are set on marrying well.

In my Jan and Adam example, it could be that Jan is Canadian and the only way she can stay in the US is to find someone to marry. One fellow is keen to wed her but she doesn’t like him at all. The other, more standoffish, candidate is Adam.

d. Secrets Must Be Held


For example, one of the lovers is a crown prince while the other is a scullery maid. Their affair must remain secret because the scandal of it all would topple the monarchy.

In my Sue and Adam example, Sue doesn’t tell Adam she didn’t kill Skyler, and Adam doesn’t tell Sue, because they want to protect each other.

Also, often, one or both of the lovers will lie to themselves.


There are all sorts of rituals. People who have been together for years have a shared history. They’re always saying things like, “Do you remember that time when ...” and the other person will remember. It’s a kind of ritual. Shared intimacies that only that couple knows about.

But it’s more than that. It’s a way these two people behave together. A shared memory, a shared experience, a shared way of being.


The lovers become better people over the course of the story.


I’ve decided that I’m going to try, every post, to pick a book or audiobook I personally have loved and recommend it to my readers. This serves two purposes, I want to share what I’ve loved with you, and, if you click the link and buy anything over at Amazon within the next 24 hours, Amazon puts a few cents in my tip jar, at no cost to you. So, if you click the link, thank you! If not, that’s okay too. I’m thrilled and honored that you’ve visited my blog and read my post. :-)

Today I would like to share a link to Shawn Coyne’s book, The Story Grid: What Good Editors Know. If you swing toward the plotter end of the plotter/pantser continuum, then you’ll love this book. I’m about halfway through it and wish I’d had this information when I first started out. It would have saved me a lot of time.

That’s it! What do you think of this way of structuring love stories? Do you do something similar? Either way, please share! I love talking to other writers and discovering how they do things.
Karen Woodward at 6:35:00 PM
Share