How To Write A Choose Your Own Adventure Novel, Part Two 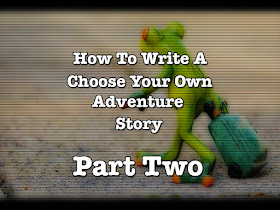 A couple of years ago I wrote a blog post, How to Write a Choose Your Own Adventure (CYOA) story. It's one of my favorite posts because I love CYOA stories. I mean, who wouldn't? They're a cross between a book and a game!

The Narrative Blocks of a Choose Your Own Adventure Story


Novels are composed of scenes and sequels.

Let's talk about scenes. Just like a story, each scene has a beginning, a middle and an end. In the beginning we establish the characters and setting, in the middle conflict is generated by characters who strive to achieve their goals and inevitably fall short. At the end of the scene, though there is a resolution of sorts, often the hero will fall short of reaching his scene goal.

So that's a scene. What is a sequel? I'll let Jim Butcher explain this. On his Livejournal, he writes:


Sequels are what happens as an aftermath to a scene. They do several specific things:

1) Allow a character to react emotionally to a scene's outcome.

2) Allow a character to review facts and work through the logical options of his situation.

3) They allow a character to ponder probable outcomes to various choices.

4) They allow a character to make a CHOICE--IE, to set themselves a new GOAL for the next SCENE.

2) Sequel--Damn it! Think about it! That's so crazy it just might work!--New Goal!

Repeat until end of book.


When I write a scene, I use index cards, one card per scene. The cards themselves can be physical index cards—I've outlined that way many times!—but, of course, there's an app for that these days. I use the Index Card app. In any case, here is the information I put on the cards:

1. GOAL: What does the main character want?

2. STAKES: What does the character have to win or lose?

Make a list of all the characters in the scene and then, for each of them, go through these questions:

4. WHAT: What happens in the scene?

Summarize what happens in the scene in one or two sentences.

5. WHERE: Where does the action in the scene take place?


Note: Not all these questions will be relevant for each setting.

6. WHEN: When does the action in the scene take place?

Does the action take place inside or outside? Is it day or night? What time is it? What date is it?

7. URGENCY: Why does the main character have to attain their goal now?

Why must the protagonist attain their goal? What is pushing them, and the action of the story, forward?

Often—perhaps too often!—this is taken care of by a ticking clock of some kind. This doesn't have to literally be a ticking clock (though sometimes it is). Perhaps one of the characters is ill and requires treatment, or perhaps (as with Sherlock Holmes) the main character is simply bored.

Urgency: The main character is ill and must receive treatment soon or they will die.

Opposition: The nearest hospital is over a day's walk away and the character requires treatment within the next couple of hours.

Resolution: The character collapses but is found by a hiker who happens to have a satellite phone.

Urgency: Sherlock Holmes is bored. If he doesn't get an interesting case soon, he will start shooting up Mrs Hudson's walls.

Opposition: John Watson, or perhaps Mycroft Holmes, wants Sherlock to do something ordinary and uninteresting.

Resolution: Someone comes to Sherlock with an interesting case.

For more about structuring a scene see: Using Index Cards to Outline a Novel.

Making readers care about your characters is essential to good storytelling. If we can do that then we will have devoted readers. Mastering the sequel is the key to this.

But let's not get ahead of ourselves. What are the elements of a sequel? Here's Jim Butcher again:

And it MUST happen in THAT ORDER.

Let's go over this point by point:

Sequels are all about reaction. At the beginning of the sequel we see the character reacting to whatever happened at the end of the scene. Recall that at the end of the previous scene the character underwent a stressful experience—most likely a setback—and now we get to see how they react to it. This, right here, is a large part of character development. How we react to major setbacks reveals character. This is true in real life and it's equally true in literature.

The character turns from looking backward to looking forward. Given that this happened in the past, what is likely to happen in the future? Given that the antagonist whipped my hide just now, how can I change my tactics so that doesn't happen again? Part of the anticipation phase is thinking of various things that could happen, various possible futures, possible paths the protagonist could take. The protagonist thinks about each of these possibilities and how he or she could respond.

Now it is time for the protagonist to choose which path to take. He has had his emotional reaction. He has calmed down and thought about it calmly. He has thought about various things the antagonist could do next and how he might counter it. Now it is time to choose among these possibilities and finalize the plan. This gives the protagonist a new goal and leads into the next scene.

Next installment: How to Write a CYOA Novel, Part Three.

Want to have all this information in one place? Get How to Write a CYOA Story! Right now it's only $0.99 on Amazon.

Today I'm recommending, Elements of Fiction Writing: Conflict and Suspense by James Scott Bell. From the blurb: "Ramp up the tension and keep your readers hooked! Inside you'll find everything you need to know to spice up your story, move your plot forward, and keep your readers turning pages. Expert thriller author and writing instructor James Scott Bell shows you how to craft scenes, create characters, and develop storylines that harness conflict and suspense to carry your story from the first word to the last."


This has been a blog post about how to write a CYOA story, but what I've said, above, is true for any story. Next time I will dive into the unique aspects of CYOA stories and examine their structure. Also, I'll talk about how to approach scenes and sequels given the branching nature of a CYOA story.

That's it! Tomorrow I'll post a writing prompt on my Wordpress site (I tweet them as well), so head over there if you'd like to do a quick writing warmup! Otherwise, I'll talk to you again on Monday. Have a great weekend and, in the meantime, good writing!
Karen Woodward at 11:21:00 PM
Share