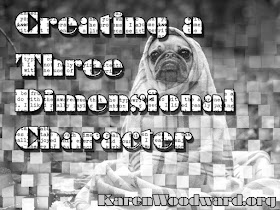 Robert Mckee, in his wonderful tome, "Story," talks about how giving characters opposing qualities helps breathe life into them.

One way to make a character three dimensional is to give them diametrically conflicting characteristics. And, of course, the best way to do this is to show and not tell. Which raises the question: if a character is, say, both generous and selfish how do we show this?

1. People. Have the protagonist interact with different people. With one person they are, for example, bold and outgoing, with another they are shy and retiring.
2. Setting. Either have one character interact with two different settings, or have two characters who have opposite characteristics interact with the same environment.
3. Time. Look at a character at different times. (This is, I think, the most common way of exploring character.)

How to show opposing characteristics:


In real life I wouldn't act one way to a friend and the next second act the complete opposite way. For instance, I wouldn't give a friend—or anyone!—a big bearhug and then slap their face. That behavior wouldn't even make sense.

Obviously, our characters shouldn't behave that way either. If we want to use our character's interactions with other, fictional, people to bring out diametrically opposed aspects of their personality then we craft other characters to specifically tease these characteristics out.

For instance, with one character—perhaps a character who is absent-minded (they’re always dropping things, forgetting where they left their glasses, their keys, etc.)—the protagonist is snippy and short. But with another character, perhaps one that is polished and who comes from a wealthy family, the protagonist goes to great lengths to be pleasant. This tells the reader much more than if we either just showed one side of the protagonist or told the reader the character in question was a snob.


Think of a haunted house. The dark hallways, the creaking floorboards, the mysterious groans as the house settles. You turn a corner and a sticky cobweb stretches across your face and ... what’s that? Something cold and slimy presses against your cheek. You scream and fling it off you, not really wanting to know what it was, but you can’t help it, you’re curious. You look at the object lying before you. It’s long and thin, slightly curved and covered in what looks like oil. It's a severed human finger! (Cue screaming violins.)

So there we have a setting. Now let's look at how that setting can help us with characterization.

Let's say Character A is naturally skittish and doesn't like dark old houses with ominously creaking floorboards. How would this character behave in the setting described above? I think that, like Gus on Psych, he would scream and run. (At least, that’s what I’d do!).

But what would a character like Indiana Jones do if confronted with a severed finger in the way described? I think Indy would look at it dispassionately, wonder who the finger used to belong to, then step over it. This shows us that Indy is the kind of person who has seen (and possibly done) it all. Nothing phases him. As was the case in Raiders of the Lost Ark, this is even more effective when you pair someone like Character A with Indy (as they in fact did).

Then, to show that Indy isn't just a calloused adventurer, that he is human, throw a few snakes in with him. That's right! The animal he is truly scared of. This shows us that Indy is both brave and timid, and we've demonstrated this simply by changing the environment. (The idea is to tailor the setting, the environment, to bring out these aspects of character.)

When we use a setting to show who our characters are as opposed to telling our readers who they are, not only do we avoid boring exposition, but we create movement, action and, ultimately, (hopefully!) interest.


The most common way to exhibit opposite traits in a character is to do it over a span of time.

We’re all familiar with this. The protagonist starts his journey as, say, a cringing milquetoast and, over the course of the story, gains confidence in his abilities, in himself. At the climax, he courageously faces the very scary antagonist and defeats her.

This is also what we mean by a character arc.

That's it for today! I'll post writing exercises on my new site (www.karenwoodward.org/blog) Saturday and Sunday and share them in my Twitter feed. Then on Monday I'll be back here with a new blog post. Until then, good writing!


The Key to Making a Character Multidimensional: Pairs of Opposites
Characterization Or Plot: Which Is Most Important To Readers?
Tags & Traits: Characterization And Building Empathy
Karen Woodward at 8:01:00 PM
Share