Unintuitive Findings About Weak Words And Their Use In Strong Writing 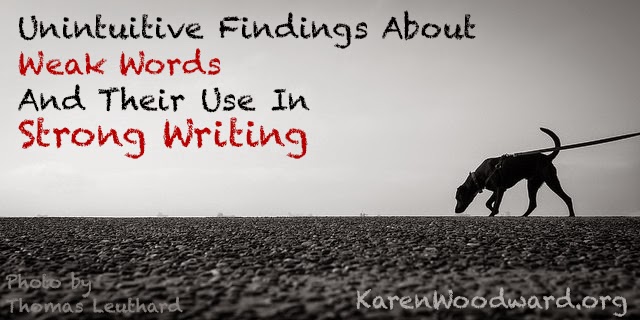 Today I’m not going to talk about the structure of stories! We’re taking a break from that for a while. Today, rather than look at the macrocosm—the structure of an entire story—I would like to examine the microcosm: words. Specifically, whether there are any words we shouldn’t use.

Recently, thanks to Pinterest, I came across this article: 8 Words to Seek and Destroy in Your Writing). The author, Bobbie Blair, selected eight words that writers are better off not using. That is, words which don’t add anything to a sentence; words which are just so much meaningless padding: [1]

I’d like (doh!) to note, here, that Blair’s view of these words is widely held. These words are often singled out as examples of weak words, filler words, words that one is better off not using. I say this because I don’t want to make it seem as though I’m singling out Mr. Blair. He’s written a wonderful article that a lot of skilled writers would wholeheartedly agree with.

Further, I agree with him. These are words I tend not to use—or try not to use—in my own writing, and for the reasons he gives.

But what I want to look at here is, do in fact writers of books I think are wonderful—books I would be proud to have written—avoid the use of these weak words?

In what follows, I’ve looked at three books I think are well-written and compared them to a book widely regarded as poorly-written. What I want to find out is which book uses the (above) weak words the most.

It turns out the well-written books use seven of these eight weak words more than the poorly written one. That was a result I was not prepared for.

The Test: The Books Used

(This is a very small sample set so I’m not saying my results are statistically significant. This is just for fun.)

Here is a book I consider a good example of weak writing:

“The Eye of Argon,” by Jim Theis

“The Eye,” was, I believe, Jim Theis’s first book, written at the tender age of 16. I’m sure that many of us have unpublished manuscripts of similar quality safely tucked under our beds or hidden in trunks, never to see the light of day. Unfortunately for Jim Theis, his book was published.

SFX Magazine called Theis’s book "one of the genre's most beloved pieces of appalling prose.” Lee Weinstein, writing for the The New York Review of Science Fiction, called it "the apotheosis of bad writing.” (For more information on this sadly fascinating book, see “The Eye of Argon” over at Wikipedia.org.)

I hope I’ve convinced you that “The Eye of Argon” is an acceptable representative of weak writing. If you’d like to read the book and make up your own mind—always a good idea—you can find it here: The Eye of Argon.

If you’re not interested in reading about how I arrived at the following numbers, then skip down to “The Results,” below.

The frequency of a word has to do with how many times that word was used in a particular book. For instance, Gillian Flynn used “suddenly” 33 times in “Gone Girl.” That’s the frequency of that word in that book. But all the books are different lengths, so it’s difficult to compare frequencies across books. For instance, Stephen King uses “suddenly” 55 times in “Under The Dome,” but that’s a much larger book than “Gone Girl.”

What I needed was a number that represented how often a certain word was used, independently of the length of the book.

As you can see, it was only for the first word, “suddenly,” that “The Eye of Argon” came out on top. For each of the other weak words, “The Eye” used the word the least. (And, again, that result is a percentage so it doesn’t matter that “The Eye” is much shorter than the other books.)

Honestly, I wasn’t expecting this result. One possibility is that the majority of weak words were used in dialogue. After all, giving a character a corny saying, or having them consistently misuse the word “literally” or “inconceivable” can help to tag them as well as reveal their character.

Unfortunately, I can’t go through all the words in all the books and check whether the weak word in question was used in dialogue, but I did do it for one word in one book, Neil Gaiman’s “American Gods.” Here’s what I found:

Of the 28 times “suddenly” was used in “American Gods” 5 of those times it was used in dialogue.

So, most of the time “suddenly” was used it wasn’t used in dialogue. I don’t have any idea whether this pattern of use is true for the other weak words on the list, I’d have to check each book for each word manually, and I just don’t have time to do that.

In any case, I thought this was an interesting, counterintuitive, result and thought I’d share it with you.


1. In the original article there were eight words and phrases. I’ve changed things slightly. “Very” and “really” were grouped as one point and the author included a phrase—“in order to”—that I haven’t examined.


(This blog post was first published on karenwoodward.org under the title: Unintuitive Findings About Weak Words And Their Use In Strong Writing.)