Eight Tips: How To Tell A Scary Story 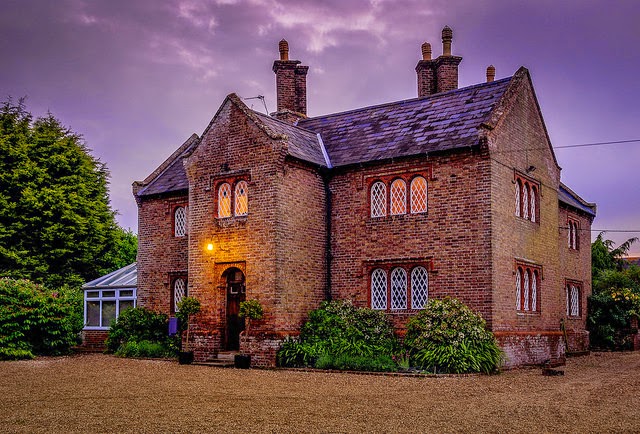 Here are eight tips on how to write horror from Brad Falchuk, the co-creator of American Horror Story. These pointers come by way of Joe Berkowitz's article "How To Tell Scary Stories, From The Co-Creator Of American Horror Story." (Thanks to +Moxlonibus Krypt, fellow horror aficionado, for sending me the link to the article.)

Think of movie posters. They usually try and communicate one big idea, the idea the movie is based on. Star Wars was swords in space, Indiana Jones was a fearless adventurer, and so on.

The big idea for the first season of American Horror Story was that of a haunted house. It was about how ghosts--and other, hidden, things--can haunt people.

How do you know if your idea is big enough?

2. Start with a believable situation, then twist it.

Create a scene your audience could easily imagine themselves in.

When I was a teenager I babysat. A lot. So did my friends. For those of you who didn't have the pleasure, babysitting involves a lot of sitting, alone, in a stranger's house after dark. Many times you don't have anything to do except look out into the darkness and imagine what sorts of things it might conceal, and what they might do if they broke into the house.

So, naturally, one of the favorite topics at sleepovers was our fear that someone would break in after dark and go all squicky on us. We talked about gruesome stories we'd heard and scared ourselves silly.

"[...] you can imagine being attacked by some kind of monster in your house. It could be nighttime and you hear noises outside, and if you can imagine yourself in some character’s shoes at that moment, it’s scary."

3. Horror is about truth, falsehood and consequences.

Always include a lie; the more, the better.

"Scary stories are very much about the idea of truth. What is truth, what is a lie, and what happens when you lie? For me the greatest horror out of anything you do is to lie, and so in any instance of great scary storytelling, there’s a lie. The biggest lie in the more typical horror movies is that you’re safe. You’re out by Crystal Lake, its beautiful there, and don't worry--those murders that happened were a long time ago! They’re not going to happen again! So you're living in a lie and you're going to suffer for it. In almost any great horror story, there’s a lot of lies."

I hadn't thought of it quite that way before, but yes. That.

Horror plays with the comforting lies we tell ourselves: "Sure the house is built over an ancient burial ground but, hey, we got it cheap! I'm sure nothing bad will happen."

Or perhaps a teenager tells her parents she's going to the family's summer cabin to study. Uh huh. Right. And then her (totally sober) friends disturb the spirit of the lake, or they run over someone, and then a gypsy curse is involved and it's all downhill from there.

The first season of American Horror Story is about infidelity. It's about how people, living people, can haunt our lives and how, sometimes, that doesn't stop after they die.

Memories of people and past events--of opportunities lost--do tend to stick around and pull one back into them when one least expects it.

5. Start an idea for a scary scene and work backward.

This works well for any kind of story. Brad Falchuk says:

"You might have this one thing, like, 'He’s a Nazi doctor doing experiments on people.' Then you just start talking through story points--does this happen? Does that? Once you hit one or two big story points--like, the doctor’s injecting something into the victim’s eyes or he chops off their legs and injects them with this stuff--then you start to think about how the victim got captured by him. What can we do in the scene before this one to make it feel even worse, and where does she end up after this happens?"

We're used to thinking about scenes in terms of one flowing into another so it is often less natural to think what the build-up, the preconditions, for a particular scene could be. Reversing the flow of the story, asking not what has to happen now, but what had to happen for this to be the case, is just as effective--sometimes more effective--in creating a gripping tale.

6. Don't be afraid to use tropes in your work, but be sure to put a twist on them.

Audiences often want the same thing as whatever else they loved--just different. Brad Falchuk says:

"You’ve seen the shower scene in Psycho--the shocking moment with the music blasting--and it’s hard to not use those kinds of moments. People come looking for them because they like them--they just want to see a different version."

That's the trick, isn't it? To take the thrills and chills from a great scene and transform it, give it a twist, and make it new but still scary as hell. BF gives us a few tips:

- If it feels too easy then it probably is.
- Does this scene get you excited? If it does then it'll probably make others feel that way too.

BF tells writers to keep pushing, to go further, and suggests two ways of doing this:

a. Take the trope further along the same lines. The movie Saw did this well. That film wasn't my cup of tea but I have to admit that it pushed squicky torture to a new level.

b. Push the trope in a different direction. "Any time you think left, you go right. The moment when you think this is a great moment for brutality you go into kindness and vice versa."

7. Show the Big Bad in all its hideous glory.

But not too often. One of the reasons Jaws worked so well was the guessing, the not knowing. As BF says, in Jaws you see the severed head float by and imagine the moment of decapitation--and probably do a better job than most special effects departments!--but at some point the audience needs to see the shark, the big white, in all its hideous, low tech, glory. Great movie.

8. Have a big-picture outline.

You want to know where you're headed, even though that can (and usually does) change as you write the story.

You don't have to know every single aspect of the story, just the big picture. BF says that "It’s like driving from New York to L.A.: you know you’re going to get to L.A., but there’s 10 different routes you could take."

Again, all quotations are from "How To Tell Scary Stories, From The Co-Creator Of American Horror Story." Thanks for reading.