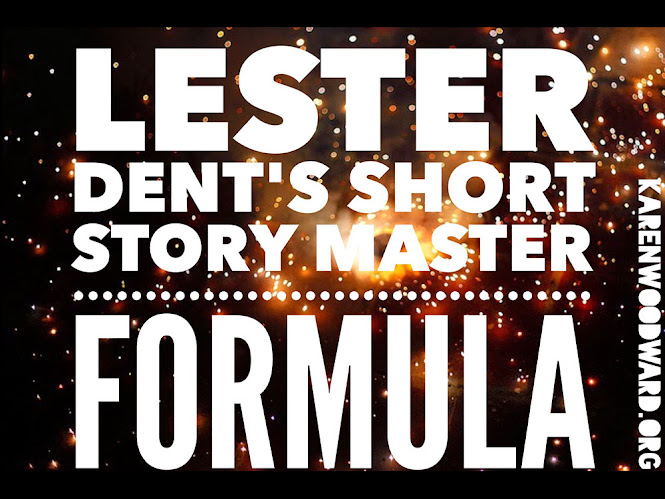 "This is a formula, a master plot, for any 6000 word pulp story. It has worked on adventure, detective, western and war-air. It tells exactly where to put everything. It shows definitely just what must happen in each successive thousand words.
"No yarn of mine written to the formula has yet failed to sell."[1]

Note: Keep in mind that Dent wrote adventure/horror/science fiction stories, ones where a lot of dead bodies showed up. That said, his formula works for anything, even stories without dead bodies, just adjust it to suit your needs.

Who was Lester Dent?

Although Lester Dent created the superhuman scientist and adventurer Doc Savage the novels were credited to Kenneth Robeson, a name made up, and owned, by Dent's publisher.

Dent started out as a telegraph operator who wrote on the graveyard shift. One of his co-workers had sold a story for $450--which was a fortune at the time--and Dent thought, "Hey, I could do that!"

Turned out he was right.

Dent eventually wrote over 159 novels over 16 years--and that was just the Doc Savage novels! He celebrated his affluence by buying a yacht and sailing around the world.

Before he died in 1959 Dent decided to gift other writers with his formula for writing a 6,000 word story.

I'll get to a blow-by-blow of Dent's method shortly but here's a summary, courtesy of Michael Moorcock:

"... split your six-thousand-word story up into four fifteen hundred word parts. Part one, hit your hero with a heap of trouble. Part two, double it. Part three, put him in so much trouble there's no way he could ever possibly get out of it. ... All your main characters have to be in the first third. All your main themes and everything else has to be established in the first third, developed in the second third, and resolved in the last third. (Lester Dent, Wikipedia)"

Note: When I talk about Dent's method, below, much of it is a paraphrase.

Before you set pen to paper here are four things to think about:

From what I've seen, the overwhelming majority of Dent's stories contained a murder. The murder method should be different than anything you've read or seen. I know, that's a tall order. But try to put a spin on it that's unique.

"A different murder method could be--different. Thinking of shooting, knifing, hydrocyanic, garroting, poison needles, scorpions, a few others, and writing them on paper gets them where they may suggest something. Scorpions and their poison bite? Maybe mosquitos or flies treated with deadly germs?

"If the victims are killed by ordinary methods, but found under strange and identical circumstances each time, it might serve, the reader of course not knowing until the end, that the method of murder is ordinary.

"Scribes who have their villain's victims found with butterflies, spiders or bats stamped on them could conceivably be flirting with this gag.

"Probably it won't do a lot of good to be too odd, fanciful or grotesque with murder methods.

"The different thing for the villain to be after might be something other than jewels, the stolen bank loot, the pearls, or some other old ones.

Here's a list of possible murder methods. These are primarily from the appropriately named article, How To Commit The Perfect Murder.

i. A sword. Perhaps a kantana.
ii. Sharpened icicle. Extra points for fashioning it from some of your victim's bodily fluids.
iii. A knife. Butchers knife, throwing knives, kitchen knife, rusty butter knife. Let your imagination guide you.
iv. A gun. Guns "can be found in bins, strapped under cars, inside folded newspapers and in every schoolchild's backpack. Remember to replace after use."
v. A car. Best if you don't use your own car. The author suggests stealing one, preferably from a Walmart. Or perhaps a long-term parking lot.
vi. A heavy object. A brick, meat tenderizer (/club), candlestick, paperweight, and so on.
vii. Heavier objects. An aeroplane, elephant, train, bulldozer, Mack truck.
viii. Pills. Available from drugstores, doctors, drug dealers.
ix. Hammer and stake. Be creative.
x. A notebook. See Death Note for inspiration.
xi. A wand.
xii. Push off a (tall) building.
xiii. Severe allergies, the more exotic the better.
xiv. Poison. Arsenic, curare, and so on.  Be creative.

Again, although there are relatively few things folks murder for (love, money, power, and so on) the particular motivation is--or at least should be--unique to your villain.

Dent describes what the villain is after as "treasure". I don't know whether he's being literal or employing metaphor. Perhaps a bit of both. Whatever his ultimate goal--for instance, let's say it's revenge--there's going to be a physical manifestation of that goal in the story.

For instance, in Star Wars IV, Darth Vader wanted to defeat the resistance  and the physical manifestation of that desire was the destruction of the rebel's base on Yavin IV.

When I first saw Star Wars--one of the local theatres was showing all the films back to back--I thought the Death Star was truly badass. It destroyed planets! It was like a roving, moon-destroying, bully. That was a new spin on an old theme.

I won't list them, but here are a few links having to do with ideas for what the treasure might be.

Ideally, the setting will be suggested by (a) the murder method and (b) the villain's goal. You'll want something that stands out, that captures the imagination.

"Unique locale? Easy. Selecting one that fits in with the murder method and the treasure--thing that villain wants--makes it simpler, and it's also nice to use a familiar one, a place where you've lived or worked. So many pulpateers don't. It sometimes saves embarrassment to know nearly as much about the locale as the editor, or enough to fool him."[1]

On an unrelated note, love that name, "pulpateer".

Dent doesn't write much about this point except to say that it is "a menace which is to hang like a cloud over [the] hero".

I mentioned Star Wars IV, above. Here are the stakes:

It kept me on the edge of my seat.

Whew! We're through the preliminaries. We now know what the murder method is, what the villain's goal is, we know the setting and we understand the stakes. (By the way, Dent says that you really only have to know two or three of the above points before you start writing. Even if you know one of them you're ahead of the game.)

Next time I'll talk about the actual writing. Dent broke a 6,000 word story into four equal parts. Next time we'll look at the first quarter and discuss the opening line and how we, in Dent's words, need to "swat him [the hero] with a fistful of trouble".

Thanks to RedFoxOne for sending me a link to Gareth-Michael Skarka's implementation of Dent's formula as a scenario generator for gaming. Brilliant! Here's the article: Pulp Adventure Generator.


1. As far as I can tell, Dent's formula comes from the book, The Creator of Doc Savage, by Marilyn Cannaday. It is also online over at paper-dragon.com: The Lester Dent Master Fiction Plot.
Correction (Dec 8, 2020): Dent's formula was first given in the Writer's Digest Yearbook, 1936. Thanks to Korodzik for leaving a comment and letting me know.