Review Of Grammarly, Its Strength And Weaknesses 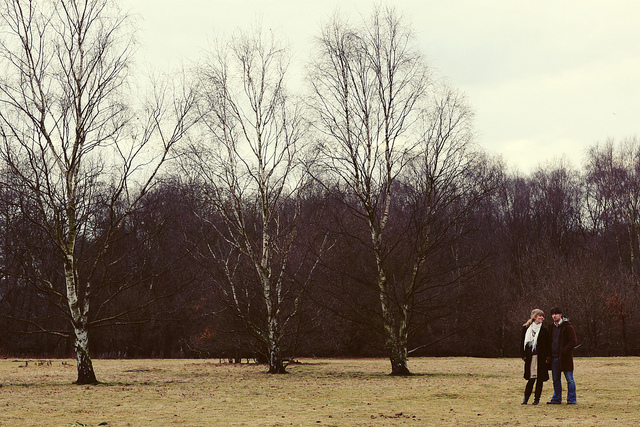 Have you ever tried Grammarly? I'd always wanted to but since Grammarly Inc. hasn't released a free-to-try version (at least, not that I know of) I haven't had the opportunity.

That's why, a couple of weeks ago when someone from Grammarly contacted me and asked if I'd like a temporary account, I jumped at the chance!

Having played around with the service more than I should--it's so easy to procrastinate doing actual writing--I'd like to discuss what I think are Grammarly's strengths and weaknesses.


Grammarly can be set to various levels of sensitivity (Grammarly calls them 'paper types') depending on the kind of writing you would like to evaluate: General, Business, Academic, Technical, Creative and Casual.

For instance, when I used the Academic type to analyze text the program flagged contractions such as "isn't" as being in error, but when I used the Casual type it didn't. I thought that was a nice feature.


Also, I found Grammarly remarkably capable when it came to finding parts of text that were taken from documents already on the internet. If you are a teacher and you want an easy way of checking papers for plagiarism, I would recommend you look into using this program.


In general, I found Grammarly remarkably easy to use. I was able to use the program to evaluate various kinds of text as well as check the text for plagiarism and, at the end, print out a concise, easy-to-read report, and all without having to Google anything to find out how to do it.


Just as beauty is in the eye of the beholder, so the perceived strengths and weaknesses of a program are dependent on the point of view of the reviewer. In other words, here's what I thought, but your mileage may vary.

Writing, at its core, is art. Art that most of us are hoping will entertain others and that we'll be able to sell--one day. But writing, really great writing, often violates grammatical constraints. The writer knowingly, intentionally disregards various grammatical conventions because he, or she, wishes to produce a certain effect.


For instance, here's a paragraph from Stephen King's book, On Writing:


And what about those critiques, by the way? How valuable are they? Not very, in my experience, sorry. A lot of them are maddeningly vague. I love the feeling of Peter's story, someone may say. It had something . . . a sense of I don't know . . . there's a loving kind of you know . . . I can't exactly describe it . . .

Grammarly went into conniptions when I fed it this! (And, in case anyone's wondering, I set the paper type to 'casual'.) The program found 34 issues with this one paragraph and gave it a score of 39 out of 100.

Let's not stop there, though. Here are the paragraphs that immediately follow the one above (the text contains adult language):


Other writing-seminar gemmies include I felt like the tone thing was just kind of you know; The character of Polly seemed pretty much stereotypical; I loved the imagery because I could see what he was talking about more or less perfectly.

And, instead of pelting these babbling idiots with their own freshly toasted marshmallows, everyone else sitting around the fire is often nodding and smiling and looking solemnly thoughtful. In too many cases the teachers and writers in residence are nodding, smiling, and looking solemnly thoughtful right along with them. It seems to occur to few of the attendees that if you have a feeling you just can't describe, you might just be, I don't know, kind of like, my sense of it is, maybe in the wrong fucking class.

Non-specific critiques won't help when you sit down to your second draft, and may hurt. Certainly none of the comments above touch on the language of your piece, or its narrative sense; these comments are just wind, offering no factual input at all.

Again, I wouldn't change a thing about the above paragraphs, but here's what Grammarly says:

- 1 mistake made when comparing two or more things.
- 2 mistakes made concerning punctuation within a sentence.
- 1 mistake with spelling.

Here is a screenshot of the report Grammarly generated: 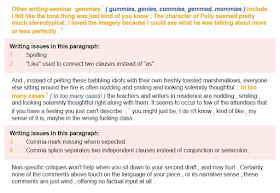 
But let's not stop there. Chuck Wendig recently wrote yet another amazingly awesome blog post on the art and craft of writing. Chuck writes:


The power of withholding is key to telling a good story.

When describing something, withholding description allows for the audience to do work, to fill in the gaps, to bring something to the table and be a collaborator (at least in spirit) to the work. Further, by withholding description, you do not overwhelm with needless illustrative information. (Do we need to know what every lamp and sidetable and fingernail and skin tag look like? No we do not.) Pull back. Leave room. Do not overwhelm.

When creating characters, withholding aspects of that character (but teasing the existence of those aspects) gives us a sense of wanting to know more, more, more. A character with unrevealed secrets or stories interests us: we’re the kids at Christmas morning tearing through a pile of presents hoping to get to the big reveal at the end (a new bike! a BB gun! a Barbie dream home! a Turkish scimitar with which to behead thine enemies!).

I think these paragraphs are written beautifully, I wouldn't change a thing. Let's see if Grammarly agrees with me.

Grammary says that the above paragraphs contain:

- 1 mistake made when using articles, and how articles relate to nouns.
- 1 confusing modifier.
- 1 mistake concerning punctuation within a sentence.
- 2 spelling errors.
- 2 mistakes regarding capitalization.

In all, 7 issues were found and the text received a score of 65 out of 100. Here's a screenshot of the .pdf report generated: 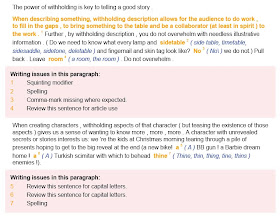 
I've provided the examples, above, so that you can draw your own conclusions. Whether grammarly is for you depends, by and large, on what kind of thing you write.

If I was writing an academic paper, I think I would find Grammarly a helpful tool. On the other hand ...

Well, let me put it this way. Chuck Wendig's writing sometimes seems like verbal jazz, his metaphors, the way he uses profanity and bizarre analogies to create an image in the reader's mind (often not entirely a pleasant one!).

Chuck Wendig's writing is fresh, often surprising and always interesting. I think the same is true for Stephen King. Programs like Grammarly have trouble with this kind of writing--the kind of writing many of us aspire to--but that's not surprising. There is no formula for art.

If money wasn't a factor, I would seriously consider subscribing to Grammarly. True, when I'm zinging creatively Grammarly will give me some flack, but it also can catch the few times I do something silly. Yes, of course I'm going to send my work off to a line editor/copy editor before I publish, but still. It's nice to send off copy that is as good as one can make it.

- Joe Konrath Makes $15k A Week Selling His Backlist
- How To Be A More Productive Writer: Use A Voice Recorder
- Writing And The Monomyth, Part Three

Other articles about Grammarly: