The Starburst Method: Discovering Your Characters 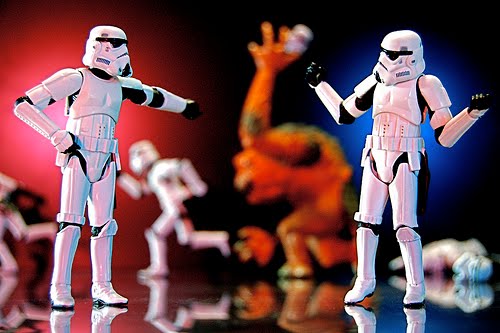 First of all, I'd like to thank all the folks who contacted me with feedback about my last Starburst Method post: The Starburst Method: What It Is And What It Can Do. Your comments were overwhelmingly positive and reminded me again why I love to write. Thanks! :-)

Let's dive back in.

Yesterday I talked about what our objectives are. We're starting with an idea, perhaps a vague one, and shaping it until we have a clear notion of our stories' main themes. At that point we'll start developing the story itself. First we'll develop a five paragraph summary after which we will hone our ideas even further and craft a sentence that summarizes our entire story.

Why are we interested in creating a summary of our story?

I talked about this in the last section, but, basically, it will help us wow both editors and family members when we're asked what our story is about. Also, It will keep us on track while we write it. Last, but certainly not least, it will allow us to spot any weaknesses in the skeleton of our story before we write it.


What we need to begin: Some idea of what our story is about


This could be as vague as: I want to write about a group of clueless young people going to vacation in a lonely cabin in the woods. We just need something, some seed, to start from. Hopefully this will act like (to switch metaphors) a grain of sand in an oyster and we'll form something wonderful around it.

This blog post is more of an exercise, so you'll need pen and paper or the electronic equivalent. Okay? Ready? Let's go!

I'd like you to write down your answers to the following questions:


- Is your character, as my grandmother would have said, gainfully employed?

If so, what do they do? Do they like what they do? If not, what would they rather do?

- If your character doesn't have a job, how do they get by?

Perhaps they do something less than reputable.

- What is your character's name?

If you don't know yet, that's fine.

- Your character has a special ability. What is it?

- Your character has a weakness. What is it?

Perhaps they are egotistical in the extreme, perhaps they have no social graces, perhaps their age puts them at a disadvantage, perhaps--as in Mr. Monk's case--their strength is (attention to detail) is also their weakness.

For instance, Mr. Monk wanted to be a detective again. More than anything else, that's what he wanted. For each episode, each story, in that series Mr. Monk had a goal and that goal reflected this this want, this overall desire, in some way. We're not talking about concrete goals here, we're talking about lifelong, life-directing, desires. For instance, wanting to be a well-paid, full-time, writer.


- What is your character's goal?

You may not know the answers to all these questions right now and that's fine. We're 'priming the pump' here. The really important question for our purposes is the big question: What is this character's goal?


I like to think of the antagonist as the hero of his own story. In their own eyes they're doing the right thing, even the good thing. Sure, not all antagonists are like this. There are megalomaniacs who are bent on ending the world, but those guys (and gals!) are usually kinda crazy and while that's fun to read it's a different kind of antagonist. I find that they become less of a person and more like a force of nature.

I probably should have said something about this yesterday, but in this series of articles I'm talking about writing a very simple story, so we're looking at the conflict that exists between two people (external goal) or between a person and themselves (internal goal).

So, with that in mind, answer the same questions as you did for the protagonist, but now with the antagonist in mind.


It has to be impossible for both your protagonist and antagonist to achieve their goals. They can both fail, but they can't both succeed. For instance, if Indie gets the ark then the Nazi's don't have it and vice versa. The Death Star cannot both be destroyed and, at the same time, obliterating planets in the service of the Empire.

I'm not going to say that the goal has to be tangible, but if you haven't written many stories you might want to be kind to yourself and go with something tangible, something like an ark or a maltese falcon or a ring.


We're almost done for today, just one more thing: What are the stakes? What happens if your protagonist doesn't achieve her goal? Another way of saying this is to ask: What happens if the antagonist achieves his goal?


Before we go any further I'd like to say a word or three about DREAMS and DREAMS VERSUS GOALS. In Star Wars IV Luke's dream was to defeat the Empire, which meant defeating the Emperor. How, in practical concrete terms, could this happen? Answer: By accomplishing the goal and destroying the Death Star.

In Raiders Indie had two dreams: defeat the Nazi's and have the opportunity to study the ark. How could he make each of these dreams come true? By accomplishing the goal and acquiring the ark.

In Raiders the Nazi's would have won the war. In Star Wars IV the Death Star would have gone on destroying planets and the rebellion would have been crushed.

So, what is at stake? It is the dream.

Here's how I think of it: The goal is like the dream's avatar. Indie's dream and Belloq's never go head to head, they can't. They can only compete at the level of goals.

Make The States Clear and Personal


We need to know (a) what the states are--what happens if the protagonist fails and the antagonist doesn't--and (b) what this means for the world in general and, specifically, for the protagonist.

For instance in Raiders if the Nazis had gotten hold of the ark it wouldn't have been good for the world, but it would have been even worse for Indie because he'd have been dead. (Of course in Raider's, strictly speaking, Indie failed and the ark itself stepped in to save the day.)

In Star Wars IV if the Death Star isn't destroyed then the rebel alliance will be crushed and the empire will have won but it would be even worse for Luke because he, and everyone he cared about, would be dead.

In Jim Butcher's book Changes if Harry Dresden doesn't save his daughter from the Red Court then he, and everyone he is related to, will die.


At this point you should have something like this:

Special Weakness: He is impatient. Young. Rash. Prone to anger. He may not be teachable, he may fall to the dark side of the force.

Wants/Dream: To find out who is father was and exact revenge on the person who killed him, as well as on the empire in general.

Character's Goal: To destroy the Death Star and, in so doing, defeat Darth Vader and the Empire.

Special weakness: Anger and pride made him vulnerable to the dark side of the force.

Wants/Dream: To make the empire strong--unassailable--and snuff out the rebel alliance.

Character's Goal: To safeguard the Death Star and use it to solidify the Emperor's hold over the known universe.


In the next section of this series we will take the basic skeleton we've come up with and flesh it out. Specifically, we'll learn more about the ordinary and special worlds our intrepid protagonist must venture through as well as pit our protagonist, the hero of our story, against his arch-nemesis.

Update: Here is a link to the next article in this series: The Starburst Method: The Hero's Journey, Part 1.

- The Starburst Method: What It Is And What It Can Do
- The Magic Of Stephen King: An Analysis Of The Opening Paragraphs Of The Dead Zone
- Scene Goals: What Do Your Characters Want, Why Do They Want It, How Do They Get it?