How To Succeed As A Writer: The Value Of Failure 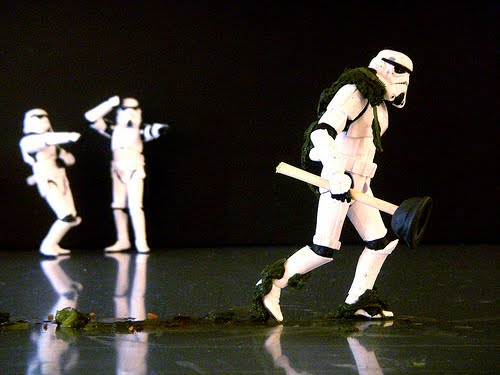 We've all failed. Seth Godin believes that failing is good but that failing big is even better. Why? Because unless you're failing you're not really trying. (NexGen Interviews - Seth Godin)

But how does this philosophy apply to writers? That's something I've been thinking about lately. This morning I came across How to Become a Writing Rockstar: A Simple Guide. In it Henri Junttila asks: What is the goal of writing?

When we know what the goal is, perhaps he can understand how failure can help us. So, here's what Henri thinks the goal of writing is: To write authentically, to write honestly. "When you stay true to your quirky self, you are already a rockstar."

That echoes something Seth Godin said:

You might say, "Oh, but what if people don't like me! What if I release my work on Amazon and I get a bunch of 1 star reviews?"


1. Failure Shows You How To Get Better


Here's why failure is so important: it shows you how to get better. Seth writes:

So, congratulations! Sure, you failed, but you tried something. And, as a result, you learned something.


2. Failure Is Safer Than Not Failing


What you did is actually a very safe thing. Seth writes:


I want to use the words uncomfortable zone [rather than "danger zone"] because it is, in fact, a very safe place to be because it’s not fatal. No one ever died writing a blog post. What we’re saying here is that for a while anyway, the safest thing you can do is to be as uncomfortable as you can stand to be. (How to become a Successful Writer: Seth Godin in Conversation – Part 2)

Your writing career is not over because you wrote and published a story that people hated (and I'm pretty sure not everyone hated it). Remember: YOU didn't fail, your story did.

Seth Godin puts it this way:


Most people who are getting started in writing do not have the confidence of a best-selling author. They are not comfortable sharing their work far and wide. They’re not comfortable saying, ‘I don’t have a publisher. I’m going to publish myself. Here, I wrote this.’ They would rather have the safety that comes from saying, ‘Well, I didn’t decide this was good. Penguin decided this was good.’ ‘I didn’t decide this was worth reading. Simon and Schuster decided it was worth reading.’

My argument is that all the things that feel uncomfortable are actually the safest things you can do. To every novelist who is complaining or bitter about all the publishers who won’t publish them, I say: Take your novel, make it into a PDF. It’s free. E-mail it to fifty of your friends.

On the other hand, if the fifty people you sent it to don’t share it with anyone, then you haven’t written a good enough novel, and you should start over. But either of those paths is better than sitting at home complaining about the fact that you can’t get published. (Part 1)

You have to accept that putting your writing out there is no longer difficult. What’s difficult is getting someone who encounters your writing to share it with someone else. That changes the kind of writing you should be doing. You shouldn’t ever again be writing to please an editor. (Part 2)


I don’t consider it a good day unless I fail. I’ve written thousands and thousands of blog posts. Most of them aren’t that great. I’ve written books that didn’t sell as well as the publisher wanted. I’ve launched internet projects that have fallen on their face. I’ve had negotiations where I completely misunderstood what the other person was looking for, or they misunderstood me, and we walked away from each other.


The Key To Success As A Writer


Don't write to please everyone. If you do that you'll please no one.


If you’ve accepted that the rules of the game are that you are not willing to write unless everyone likes what you write, then you’ve just announced that you’re an amateur, not a professional, and that you’re probably doomed. Whereas the professional writer says, ‘It is almost certain that most of what I write will not resonate with most people who read it, but over time, I will gain an audience who trusts me to, at the very least, be interesting.’ (Part 2)

The power of the internet, for writers, is that we can find a small group of people who are interested in the same things we are, the the things we write about. Seth writes:


I was in Iceland last week ... and one out of every six hundred people in the whole country came to see me speak. This would be the equivalent of fifty thousand people seeing me in the United States, which has never, ever happened.

Iceland teaches an important lesson. It’s such a tiny place, yet it’s possible to have a café that succeeds. The café succeeds not because everyone in Iceland goes there, but because enough people go. Whether you live in New Zealand, Malaysia or the United States, the internet connects you to four billion people.


If failure is okay (but mistakes are not), then is there anything you shouldn't do? Seth Godin says there is one thing you should never be: boring. He writes:


Whether you’re a writer or the maker of widgets, you won’t be able to keep going if you’re boring. (Part 2)


Seth Godin was asked to give advice to new writers. What should a new writer do? His reply:


There are three steps: write, ship, share. When you write and ship and share and you see whether or not it resonates, you will get better at what you do.

My Question: Are you convinced? Do you think failure is necessary for success?

- The Magic Of Stephen King: A Sympathetic Character Is Dealt A Crushing Blow They Eventually Overcome
- Ray Bradbury On How To Keep And Feed A Muse
- Fleshing Out Your Protagonist: Creating An Awesome Character