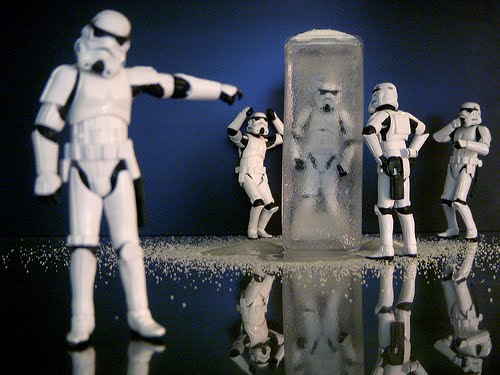 Think of what a story would be without structure. Many of us don't have to imagine it, we have those stories buried under our beds!

Structure helps move a story along, it lends novels that most mysterious of things: narrative drive. The I-can't-put-it-down quality that keeps sane people up way past their bedtime.

Structure also helps writers when we have that feeling: Gee, shouldn't something be happening about now? But what? Following a structure, or even reading about it, can generate ideas.

The Purpose Of Writing/Storytelling


Screenwriters talk about structure more than novel writers, so I've been studying screenwriting. Not with the intention to write a script--novels are challenging enough!--but to learn about different story structures.

Whether we're talking about writing a novel, short story or a screenplay, it's the same basic idea: We're telling a story to an audience. We are entertainers seeking to wow the crowd.

One concept I discovered recently, that of the Pinch or Pinch Point, is another tool a writer can stow away in her toolbox just in case she needs it. And, during NaNoWriMo, who knows what will come in handy before the month is through.


A pinch point is a reminder. It's a reminder of who the antagonist is and what is at stake. Further, this reminder isn't filtered by the hero's experience. In other words, it's not just how the hero sees the antagonist, or antagonistic force, this is how they are. Here we see their true nature. (Story Structure Series: #9 – Pinch Points, Larry Brooks)

The Structure Of Your Story: How To Use Pinch Points

Clear as mud? Here's a drawing: 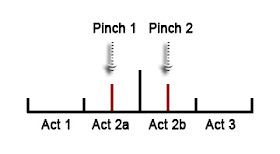 
The first pinch point reminds us of the central conflict of the story.


The second pinch point, like the first, reminds the audience of the central conflict of the story, but it also is linked to the first (Wikipedia, Screenwriting). It shows the audience the threat (whatever it is that still stands in the way of the hero achieving his goal). The pinch point scene lays out what the hero has yet to conquer/overcome/accomplish. (“The Help” – Isolating and Understanding the First “Pinch Point”, Larry Brooks)

My background isn't in screenwriting but, to me, pinch points seem a lot like sequels. Not exactly like a sequel, though, because sequels come after the scene, after the action. Perhaps a pinch is like a scene+sequel. You show your audience the antagonist in all their unadulterated glory (or horribleness) and then you see the aftermath, the personal consequences for the hero, the goals he has still accomplish and why he must accomplish them.

[I]n Star Wars, Pinch 1 is the Stormtroopers attacking the Millennium Falcon in Mos Eisley, reminding us the Empire is after the stolen plans to the Death Star R2-D2 is carrying and Luke and Ben Kenobi are trying to get to the Rebel Alliance (the main conflict). (Screenwriting, Wikipedia)

In Star Wars, Pinch 2 is the Stormtroopers attacking them as they rescue the Princess in the Death Star. Both scenes remind us of the Empire's opposition, and using the Stormtrooper attack motif unifies both Pinches. (Screenwriting, Wikipedia)

Even if we end up not using them, the concept of pinch points can help remind us that we shouldn't lose sight of the antagonist in the story. Sometimes this is a danger when the antagonist works behind the scenes, through his or her minions, and receives little "on stage" time.

If you're doing NaNoWriMo this year, best of luck! How's it going? It's been tough for me. Life has a way of intruding on my writing time. But that's okay! I'm at approximately 12,075 words, hopefully I'll have over 14,000 by the end of the day.