Stephen King: How His Novel "Carrie" Changed His Life 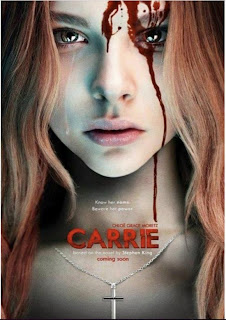 
I had four problems with what I'd written. First and least important was the fact that the story didn't move me emotionally. Second and slightly more important was the fact that I didn't much like the lead character. ... Third and more important still was not feeling at home with either the surroundings or my all-girl cast of supporting characters. ... Fourth and most important of all was the realization taht the story woudln't pay off unless it was pretty long ... You had to save plenty of room for those pictures of cheerleaders who had somehow forgotten to put on their underpants--they were what guys really bought the magazines for. I couldn't see wasting two weeks, maybe even a month, creating a novella I didn't like and wouldn't be able to sell. So I threw it away.

The next night, when I came home from school, Tabby had the pages. She'd spied them while emptying my waste-basket, had shaken the cigarette ashes off the crumpled balls of paper, smoothed them out, and sat down to read them. She wanted me to go on with it, she said. She wanted to know the rest of the story. I told her I didn't know jack-shit about high school girls. She said she'd help me with that part. She had her chin tilted down and was smiling in that severely cute way of hers. "You've got something here," she said. "I really think you do." (pp. 76 to 77)

Boy, did he! A few pages later King writes about receiving a call from Bill Thompson telling him that the paperback rights to Carrie "went to signet Books for four hundred thousand dollars. (p. 86)"

Stephen King writes of his reaction:


I hadn't heard him right. Couldn't have. The idea allowed me to find my voice again, at least. "Did you say it went for forty thousand dollars?"

"Four hundred thousand dollars," he said. "Under the rules of the road"--meaning the contract I'd signed--"two hundred K of it's yours. Congratulations, Steve."

I was still standing in the doorway, looking across the living room toward our bedroom and the crib where Joe slept. Our place on Sanford Street rented for ninety dollars a month and this man I'd only met once face-to-face was telling me I'd just won the lottery. The strength ran out of my legs. I didn't fall, exactly, but I kind of whooshed down to a sitting position there in the doorway.

On Writing is a marvelous book on the craft of writing, as well as a wonderful autobiography. No other book has had the impact on my writing this book has and I wholeheartedly recommend it.

What is your favorite writing story?

Other articles you might like:
- How Do Writers Get Their Ideas? Neil Gaiman, Seth Godin & Stephen King
- Stephen King's Latest Book: A Face In The Crowd
- Quotes From The Master of Horror, Stephen King
Karen Woodward at 2:05:00 PM
Share