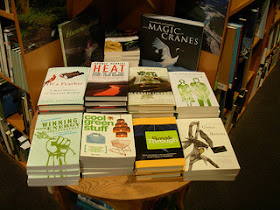 I was surprised when I read that John Locke paid for book reviews. I was even more surprised that he required the reviewers to be honest; if the reviewer wanted to give his book a 1 star review, that was fine.

But why would someone pay for a one star review? A one star review screams at readers: don't buy this book, you won't like it! Here's what Mr. Locke had to say:


“My first marketing goal was to get five five-star reviews,” he [John Locke] writes. “That’s it. But you know what? It took me almost two months!” In the first nine months of his publishing career, he sold only a few thousand e-books. Then, in December 2010, he suddenly caught on and sold 15,000 e-books.

One thing that made a difference is not mentioned in “How I Sold One Million E-Books.” That October, Mr. Locke commissioned Mr. Rutherford to order reviews for him, becoming one of the fledging service’s best customers. “I will start with 50 for $1,000, and if it works and if you feel you have enough readers available, I would be glad to order many more,” he wrote in an Oct. 13 e-mail to Mr. Rutherford. “I’m ready to roll.”

Mr. Locke was secure enough in his talents to say that he did not care what the reviews said. “If someone doesn’t like my book,” he instructed, “they should feel free to say so.” He also asked that the reviewers make their book purchases directly from Amazon, which would then show up as an “Amazon verified purchase” and increase the review’s credibility.

In a phone interview from his office in Louisville, Ky., Mr. Locke confirmed the transaction. “I wouldn’t hesitate to buy reviews from people that were honest,” he said. Even before using GettingBookReviews.com, he experimented with buying attention through reviews. “I reached out every way I knew to people to try to get them to read my books.”

Many of the 300 reviews he bought through GettingBookReviews were highly favorable, although it’s impossible to say whether this was because the reviewers genuinely liked the books, or because of their well-developed tendency toward approval, or some combination of the two.

Mr. Locke is unwilling to say that paying for reviews made a big difference. “Reviews are the smallest piece of being successful,” he said. “But it’s a lot easier to buy them than cultivating an audience.”

John Locke commissioned reviews on October 13th and his book sales took off in December. I imagine it would probably take about a month for the reviews to start coming through, so those paid reviews could have been an important factor in his December success. Of course, that Christmas was coming up wouldn't have hurt.

That John Locke paid for reviews is just one part of an article about Todd Rutherford and his book review site: gettingbookreviews.com.

The tale of GettingBookReviews.com, which commissioned 4,531 reviews in its brief existence, is a story of a vast but hidden corner of the Internet [...].
.  .  .  .
In the fall of 2010, Mr. Rutherford started a Web site, GettingBookReviews.com. At first, he advertised that he would review a book for $99. But some clients wanted a chorus proclaiming their excellence. So, for $499, Mr. Rutherford would do 20 online reviews. A few people needed a whole orchestra. For $999, he would do 50.

There were immediate complaints in online forums that the service was violating the sacred arm’s-length relationship between reviewer and author. But there were also orders, a lot of them. Before he knew it, he was taking in $28,000 a month.
.  .  .  .
How little, [Todd Rutherford] wondered, could he pay freelance reviewers and still satisfy the authors? He figured on $15. He advertised on Craigslist and received 75 responses within 24 hours.

Potential reviewers were told that if they felt they could not give a book a five-star review, they should say so and would still be paid half their fee, Mr. Rutherford said. As you might guess, this hardly ever happened.

Amazon and other e-commerce sites have policies against paying for reviews. But Mr. Rutherford did not spend much time worrying about that. “I was just a pure capitalist,” he said. Amazon declined to comment.

Mr. Rutherford’s busiest reviewer was Brittany Walters-Bearden, now 24, a freelancer who had just returned to the United States from a stint in South Africa. She had recently married a former professional wrestler, and the newlyweds had run out of money and were living in a hotel in Las Vegas when she saw the job posting.

Ms. Walters-Bearden had the energy of youth and an upbeat attitude. “A lot of the books were trying to prove creationism,” she said. “I was like, I don’t know where I stand, but they make a solid case.”

For a 50-word review, she said she could find “enough information on the Internet so that I didn’t need to read anything, really.” For a 300-word review, she said, “I spent about 15 minutes reading the book.” She wrote three of each every week as well as press releases. In a few months, she earned $12,500.

“There were books I wished I could have gone back and actually read,” she said. “But I had to produce 70 pieces of content a week to pay my bills.”

In case anyone is thinking, "There should be a law against this!" let me assure you there is.

The Federal Trade Commission has issued guidelines stating that all online endorsements need to make clear when there is a financial relationship, but enforcement has been minimal and there has been a lot of confusion in the blogosphere over how this affects traditional book reviews.

Todd Rutherford's company has been shut down and he now sells recreational vehicles. If you would like to read David Streitfeld's article about Tod Rutherford, click here: The Best Book Reviews Money Can Buy.

Book review sites for indie books are desperately needed, but paying for reviews is not the way to go about it.

Other articles you might like:
- Picking Up The Threads: Getting Back Into Your Story
- Hugh Howey, Bestselling Author Of Wool, On The Key To Writing Success
- Creativity: Use It Or Lose It