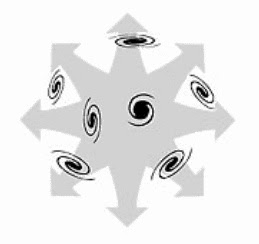 Today we are going to continue our discussion of what I've been calling the Starburst Method. Previously, we formulated a one or two sentence description of the story and expanded it into five sentences which roughly follow the 3-act structure of a play. For your convenience, here are links to part 1 and part 2:

3.Turn each of your five sentences, or mini-paragraphs, into individual paragraphs.
Keep the following points in mind:
3.1. Each paragraph should contain conflict.
3.2. The first four paragraphs must end with a problem, something that creates conflict.
3.3. Have last paragraph tell how the story ends.

I love it when other people give examples, so I'm demonstrating these steps by writing a short story. I'm a bit self-conscious about putting my writing out there, but this is just an example and it has been rather fun to do. Perhaps a few of you will follow along and write your own stories with me!

Here are the five sentences I came up with in part two:

1) A wealthy English aristocrat dies of a heart-attack after breaking the seal on the tomb of a long-dead Egyptian pharaoh. The aristocrat's death is quickly followed by the death of two men who were with him when the seal was broken: A wealthy American financier and the financier's nephew.

2) Afraid that her son will be the next casualty, the aristocrat's wife hires a private detective to uncover the true cause of the deaths, whether it is an ancient Egyptian curse or something more mundane. The detective accepts the commission and he and a college travel to Egypt to investigate.

3) As the detective arrives at the camp a renown archeologist, one who was present when the seal on the tomb was broken, dies in the most agonizing of ways. The man, an Egyptologist, was competing with an equally renown colleague from another institution. Could his rival have taken advantage of the situation to off his rival and blame it on the curse?

4) Although everyone discounts the possibility of an ancient Egyptian curse being the cause of the deaths, they spurn the detective's efforts to arrive at the truth. Did these men die from natural causes or from an ancient curse, or perhaps someone among on expedition is systematically killing people.

5) In the end, the detective uncovers the cause of the deaths: greed. The greed of someone who stood to inherit a great deal of money from the nephew, and sole surviving heir, of the wealthy financier. The archeologist was killed as a red herring.

Now I need to expand these mini paragraphs.

1) Sir Henry Winthrop, a wealthy English aristocrat leading an expedition in The Valley of the Kings, dies of a heart attack after breaking the seal on the tomb of a Egyptian pharaoh. The locals believe the man triggered an ancient curse and now the entire party is under a death sentence. For the most part, the scientists in the expedition do not believe the murmurings of doom – Sir Henry was elderly and in a state of excitement before he died, not the best thing for a man with a bad heart -- and put talk of a curse down to local superstition. After a day or two life around camp begins to return to normal. Then Mr. Kevin Reid, one of the men who broke the seal on the tomb and the money behind the project, takes ill and dies. Once again, the cause of death is, apparently, natural – septicemia. But what lies behind the disease itself? Something natural or, perhaps, supernatural?

2) Afraid her son will be the next casualty, Sir Henry's widow hires a private detective, Hexanon Pennystripe, to uncover the true cause of the deaths, whether it be an ancient Egyptian curse or something considerably more mundane. Her only interest is the well being of her son and only child. The detective accepts the commission and prepares to travel to Egypt with his intrepid colleague, Dean Armandale, to investigate. Before our crime fighting duo travels to meet up with the expedition in The Valley of the Kings, Armandale flies to New York to speak with Mr. Martin Reid, the nephew of the recently deceased Mr. Kevin Reid, and his sole heir. Upon arrival he finds himself too late, for Mr. Martin Reid has taken his own life. Has the ancient curse of the pharaoh claimed yet another life?

3) Haxanon and his sidekick, Mr. Armandale, arrive in the Valley of the Kings just in time to witness the agonizing death of renown archeologist, Dr. Paisley Blue. Dr. Blue had contracted Tetanus some days ago and nothing Doctor Brian White used in treatment was effective. Dr. Blue, a world renown Egyptologist, had been competing with Dr. Marie Bruster for the prestigious chair of antiquities at Yale. Was this really a job to kill for?

4) Most people on the expedition publicly discount the possibility of an ancient Egyptian curse causing of the deaths and view Hexanon's willingness to entertain the possibility with distain. In fact, the one thing that seems to unite the expedition is their distrust of Hexanon Pennystripe and his good friend and colleague Dean Armandale. They are the newcomers, the outsiders. Hexanon wonders whether it is simply that those on the dig do not appreciate strangers in their midst asking impertinent questions, or whether it is something more sinister. Are these deaths all from natural causes, as they appear, from an ancient curse, or is there an all too human hand behind everything?

5) At the end of the story Hexanon uncovers the cause of the men's deaths: greed. The greed of someone who stood to inherit a great deal of money from the nephew, and sole surviving heir, of the wealthy financier. Sir Henry died of natural causes, Mr. Kevin Reid was killed and his money passed to his nephew, Mr. Martin Reid. Martin committed suicide and the money was set to pass to the murderer. The archeologist was killed as a red herring. The murderer was medical doctor, Dr. Brain White. He was the common thread between the men. He was the one who infected Dr. Paisley Blue with Tetanus.

Notes: There are several things I need to do:
- I need to develop the background of Doctor White and make it clear that he was at school with Mr. Martin Reid, nephew of the wealthy Mr. Kevin Reid. I also need to hint at the incident that led Martin to leave all his worldly possessions to the good doctor.
- I need to put more emphasis on the role of the detective.
- Most important of all: Thing of a better name for the detective!

In Part 4 we will flesh out the characters we've created.