My first drive in the snow 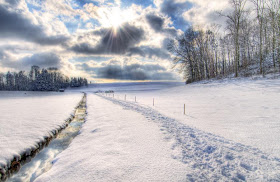 I'm not sure if I should tell you this, it's along the lines of a confession. I got my driver's license last year and -- although I live in BC, Canada -- have never, EVER, driven in the snow.

And, trust me, I had NO plans on starting. We have a great transit system and I like taking the bus; it's fast and cheap and I don't have to worry about parallel parking. However, yesterday, I wanted to go see my Dad in the hospital and it was fastest, easiest, to drive to the skytrain station (Vancouver's version of the subway).

I borrowed a friend's car and went to visit my Dad around four in the afternoon; at that point it wasn't even cloudy. Sure the air was a bit nippy, but that was it. I parked at the skytrain station, got to the hospital around five, visited with my father until eight and then prepared to leave. When I looked out the door of the hospital the world was white. There was about an inch of snow on the ground and it was falling like a white curtain. Gah!

As I rode the skytrain back I looked out the window thinking/praying, "It's only snowing in Surrey, right? There's no snow in Vancouver. RIGHT?"

By the time I sloshed my way back to my friend's car (btw, I was wearing tennis shoes!) it looked like a snowball. I hunted in the trunk for a snow scraper but the only thing it contained was a hammer. A hammer? I ask you, who carries a hammer, and only a hammer, around in their trunk? I mean, why? Who thinks: 'Oh, I might get a flat, better bring a hammer'? I don't want to seem ungrateful, my friend was very nice to lend me their car, but I gotta say, I'm a bit suspicious.

Moving on. Okay, so there wasn't a scraper. That's fine, I just used my arms to sweep the snow off the windows. Easy peasy. I started the car, cranked the heat and sat there for about five minutes trying to feel my toes. Eventually, I steeled myself, eased out into traffic and headed for home. Driving in the snow was a bit anticlimactic, actually. I had a tougher time driving over icy roads last spring.

Everything was fine until I drove to Pine Street where I'm staying. Now, there's something you need to know about this street: It's one big hill. No one can get up that hill once its covered in snow and black ice and I didn't want to leave my friend's car at the bottom where oncoming traffic could play Bumper Cars with it.

I can't convey to you the happiness that surged through me, right to the tips of my frozen toes, when I saw that Pine Street was snow free.

The car now sits snugly in my friend's garage and I am, once again, a devotee of Vancouver's transit system.

I'd be interested in hearing from anyone else who has a scary, or not so scary, driving story to share. Thanks for reading!