An Interview With Martin Lastrapes, Author of INSIDE THE OUTSIDE 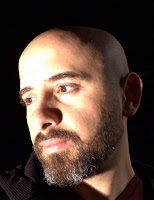 This is my first interview and I am thrilled to be able to introduce Martin Lastrapes to you, author of Inside the Outisde. Before we get into the interview, here is a bit about Martin:


My name is Martin Lastrapes and I’m a novelist. I grew up in the Inland Empire, an eclectic region of Southern California with a rich history that nobody knows about, including most of the people who live there. Despite growing up in the region that birthed the Hell’s Angels, housed the first McDonald’s restaurant and is one of the foremost manufacturers and suppliers of crystal meth, I spent the great majority of my childhood watching professional wrestling and reading comic books, when I wasn’t busy avoiding homework or wondering when I should begin my evolution of becoming Batman.

In 2003 I earned a Bachelor’s Degree in English/Creative Writing and in 2006 I earned a Master’s Degree in Composition, both from California State University, San Bernardino. While I loved the time I spent as an undergrad, I often reflect on graduate school as three years I will never get back. But, despite the hellish experience of graduate school, I have happily parlayed my academic résumé into a career as an English professor.

My writing has been published in various literary journals and websites, such as The Pacific Review and L.A. Voice. In 2004, I won awards for my short fiction from the Cal Poly Writer’s Conference, as well as the California Writer’s Club. I’m also a professional blogger. But, in the end, where it concerns writing, my primary focus and passion is on being a novelist. My debut novel, Inside the Outside, was published in July of 2011.

Q: After I wrote my book, UNTIL DEATH, I had to formulate what some people call an elevator pitch and describe it in 50 words or less. Give me yours for INSIDE THE OUTSIDE. Also, what is your favorite scene in the book?

Timber Marlow has lived her entire life within a cult of cannibals. After exploring the Outside—mainstream society—Timber sets into motion a series of events that culminate in her discovery of some unsettling truths about the world around her and the integral role she plays in it.

That was actually 46 words, so I suppose I have four to spare.  How about: She kills people, too. 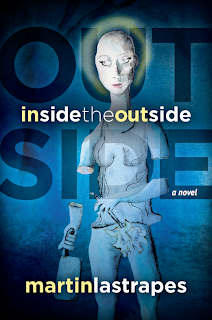 As far as my favorite scene, there are quite a few that I like very much. But, if I had to pick one, it would probably be the first Sustenance Sacrifice in the story. Within the cult, the cannibals generally eat each other after a ritual they call the Sustenance Sacrifice, where one cult member is tied down and his (or her) head is chopped off by the cult leader. I remember finishing that scene and feeling like I'd done something really good, something that readers probably hadn't seen before.  I also remember feeling very uneasy as I imagined the scene and I wondered if I should tone it down.  But, ultimately, I decided that if I could imagine a scene that made me uneasy, then I should definitely keep it in the book.  And, so far, in my conversations with folks who've read the book, it's probably the scene that's gotten the most reactions.

Q: So, what first drew you to writing about cannibalism?

Well, I'm a vegetarian, so this certainly played a role. But I think also I was drawn to the idea of cannibalism from about the age of 6 or 7 after I saw the Wes Craven film The Hills Have Eyes: Part II. My godfather, Willard Pugh, is an actor and was one of the stars in the film. Upon watching it, I think it was my dad or my brother wo explained to me what a cannibal was. Later, when I was in college and studying creative writing, I read a book about farming, which, among other things, described the life of farms animals. I was pretty horrified by most of it. I got to wondering if other people would be equally horrified, but decided that they probably wouldn't be. Then the idea occurred to me of replacing the animals with people and writing a story about it. From that point on (which was about 10 years ago) I became obsessed with the idea of writing novel about cannibals. And the result of that obsession is my debut novel, Inside the Outside.

Q: In many quarters self-publishing is still viewed as an option of last resort and something that will forever besmirch a writer's name. I agree with Joe Konrath, Dean Wesley Smith, Kristine Kathryn Rusch and many others that this is not the case. That said, many writers of my acquaintance are steadfastly committed to traditional publishing and view with horror, and perhaps even some hostility, the attempts of their fellow writers to become independent authors. I spent some years in university and emerged with a degree in philosophy and psychology and it was my experience that my fellow academics tended to be conservative. Here is my question: why did you decide to self-publish and what has been the response of your colleagues or your writerly friends and acquaintances?

Like many (if not most) writers, I first tried to get published through the traditional route of getting a literary agent to represent me and have them shop my writing around to editors and publishers. I spent at least a year or so shopping Inside the Outside around to literary agents and small publishing presses and while there was plenty of rejection, I also got the occasional bit of interest that almost always culminated into some version of the following: "This sounds good, but I don't think it's right for me." Because Inside the Outside touches on some controversial issues and presents graphic images, often of a violent or sexual nature, I knew that it might be a tough sell. But I also knew (or, at the very least, was very confident) that I had written a good book.  And, more than that, I knew, given a chance, there was an audience for my book. So the more rejections I collected, the more I realized I had two options: 1) I could keep playing the publishing lottery in the hopes of hitting the jackpot, or 2) I could take my fate into my own hands.  In the end, option #2 was more appealing, so I started Cannibal Press. The best part about being having my own publishing press is knowing that any book I decide to write will definitely get published. That's a very liberating feeling as an author, because it means all I have to worry about is writing the best book possible.  And, really, that's all any writer should have to worry about.

Q: Having self-published, how are you finding the experience and how is the reality of self-publishing different from your expectations?

The experience of self-publishing is extremely gratifying.  I expected it to be a lot of work and I suppose you can say I wasn't disappointed.  The publishing process itself was challenging, but, in the end I enjoyed it.  And even in post-publication, there is still work to be done everyday, primarily in the form of marketing and promoting.  From posting on my website (martinlastrapes.com), Facebook (facebook.com/MartinLastrapes), and Twitter (@MartinLastrapes), there is always something to do.  And, of course, trying to balance all of that, while also working on my second novel, as well as a screenplay adaptation of Inside the Outside, is pretty tricky at times.  But, even if I were a traditionally published author, I imagine I'd still be working just as hard doing most, if not all, of the same things.

Q: Writing a novel is such a complex exercise that I imagine no two authors do it exactly the same. Can you summarize your process for me?

For me, the most important part of a novel is the story, so I work out the story arc chapter by chapter.  I make sure all the primary characters have their own story arcs and that each of those story arcs coincides with the larger story.  Once all of that is worked out, then it's just a matter of writing the chapters I've outlined.  Of course, I did things a little differently with the novel I'm currently working on.  The only thing I knew when I started was I wanted to write a vampire novel.  I'd actually been itching to write a vampire story of any sort for about seven or eight years, I just didn't have any idea of what it would be about (plus I had my hands full writing Inside the Outside). Instead of waiting for an idea to come to me, I decided to just start writing. I began with the following sentence:

"Adam first sucked Olivia’s blood in the sandbox of Heritage Park, stopping briefly to yank the crucifix from her neck as it seared a red cross on the top of his hand."

From there I just started writing, stream-of-consciousness style. My hope was that I would create some characters and put them in interesting situations and, with any luck, a larger story would present itself. By the time I finished the fourth chapter, I figured out what the story was about.  I spent about a solid week outlining the whole rest of the novel. Of course, the outline isn't set in stone.  If, along the way, one character develops into something different than I imagined, then I simply go with it, while simultaneously making the necessary adjustments to my outline.  In this way, I give myself a structure to work within, without sacrificing any spontaneity or creative freedom.

Q: What is the best writing advice you ever received?

The best advice I ever received is to keep the writing simple.  Just tell the story. You never want to be so fancy or cute with your prose that you make it difficult for the reader to follow along. If you frustrate the reader, then you've defeated the purpose of writing your story at all. The other piece of advice that served me well was this: The only way to know if you're ready to write a novel is you have to write a novel.

Q: What do you most enjoy about writing?

Storytelling.  More than anything, I love trying to tell a good story. This, of course, comes from my love of being told a good story - be it in a book, a film, or simply in conversation.  If readers come to think of me as a storyteller, rather than a writer, I wouldn't complain.

Q: What advice would you give a new writer?

There are any number of things that I've learned from writing, but, in the interest of keeping this answer to a reasonable length, I'd say writing has taught me about the discipline needed to complete large, overwhelming projects.  Nobody writes a novel in one sitting. A novel is written in pieces, large and small, over a period of time.  And if you're not taking the time to produce those pieces, then it very simply won't get done. This is something that not only implies to my writing, but also my life in general.

Q: What was the most difficult challenge you faced when putting your book together?

Martin, thank you for being my first interviewee! Best of luck to you. To read more of Martin's writing, drop by his website and blog at www.martinlastrapes.com.

Edit: I forgot to mention that Martin did an interview with me! You can read it here.
Karen Woodward at 11:45:00 AM
Share