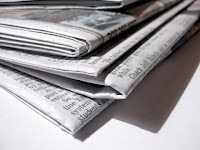 Swiftly and at little cost, newspapers, magazines and sites like The Huffington Post are hunting for revenue by publishing their own version of e-books, either using brand-new content or repurposing material that they may have given away free in the past.

And by making e-books that are usually shorter, cheaper to buy and more quickly produced than the typical book, they are redefining what an e-book is — and who gets to publish it.

On Tuesday, The Huffington Post will release its second e-book, “How We Won,” by Aaron Belkin, the story of the campaign to end the military’s “Don’t ask, don’t tell” policy. It joins e-books recently published by The New Yorker, ABC News, The Boston Globe, Politico and Vanity Fair.

I hadn't considered this possibility, that newspapers could bundle content into ebooks, but it makes sense.


When the phone-hacking scandal erupted at Rupert Murdoch’s News Corporation in early July, Vanity Fair collected 20 articles on Mr. Murdoch, his family and their businesses and put them in a $3.99 e-book that went on sale July 29. Graydon Carter, the magazine’s editor, wrote an introduction. The articles were then grouped into six chapters, each with a theme that reflected various aspects of Mr. Murdoch’s life.


“It’s like having a loose-leaf binder and shoving new pages into it,” Mr. Carter said. “E-books are a wonderful way to do a book and do it quickly. They don’t need to be fact-checked again. They do go through copy-editing. But you’re not reinventing the wheel each time.”

The New Yorker created a similar e-book about Sept. 11 using content from the magazine’s writing on the attacks and their aftermath — everything from poetry to reported pieces on Al Qaeda. It sells for $7.99.

So far, sales for the handful of digital special editions that The New Yorker has released remain relatively small. Pamela McCarthy, the deputy editor, put the number in the thousands. “The question of what constitutes well in this new world is one that seems to be up for grabs,” Ms. McCarthy said of the success so far.

Read the rest of the article here.
Karen Woodward at 11:32:00 AM
Share