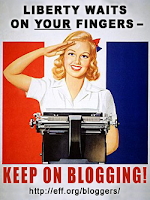 Google Brazil had $141,000 US frozen from its bank account for, first, refusing to remove three anonymous blogs accusing the mayor of Brazil of corruption and embezzlement and, second, for refusing to pay the fine the court levied against them.

After the news broke recently of Google's true name policy many, myself included, starting looking at Google differently, they were no longer the good guys. In fact, one or two bloggers used the word "evil" to describe their actions. What Google did here though, protecting dissident bloggers, was a great thing.

Perhaps Google is a bit like most of us, neither good nor bad, evil or a saint.