Amazon could sell tablet for as low as $249 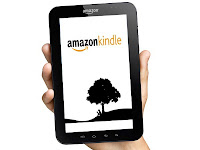 
Amazon could sell its upcoming tablet for less than it costs to make but still take home a profit in the long run, according to tech industry analyst Tim Bajarin.

Discussing Amazon's expected tablet in a column for PC Magazine last week, Bajarin derived an estimated cost for the device of $300 based on information from various sources. Assuming Amazon then discounts the retail price, consumers could pay as little as $249, projects the analyst.

Read more: Analyst: Amazon could sell tablet for as low as $249