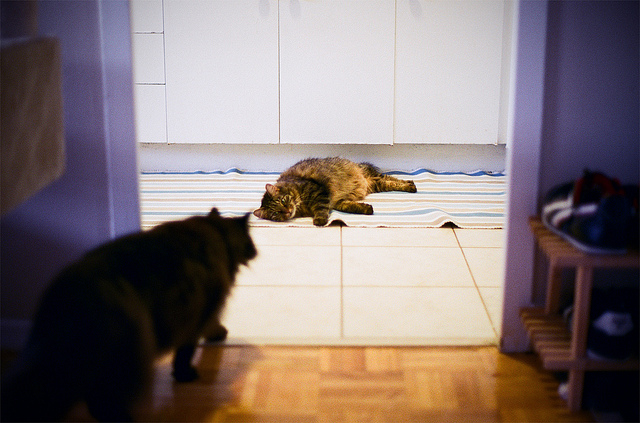 Yesterday someone sent me a terrific link to Anthony Mason's interview with Stephen King: Stephen King on storytelling.

It was a wide ranging interview and King is animated and relaxed, there's also a video. Great reading/watching.

Wait Until You've Gotten All The Pieces Together


My favorite part was Stephen King's reply to Anthony Mason about how he knows whether an idea is robust enough for a story. King is talking about his soon-to-be-published novel Doctor Sleep and says:

"That's the sort of thing where it's, like, half an idea - okay, he's dysfunctional, he's alcoholic, the way that his father was an alcoholic. But it's only half an idea.

"And then I saw this thing ... about a cat in a hospice, and this cat knew when patients were going to die. And the cat would go into their room and jump up on their bed. And that's how the personnel in the hospice knew that that patient was going to be the next one to step out.

"And what really interested me about the story wasn't the cat, per se, but the fact that the patients seemed to welcome his visit. And I thought, Well, he's like an angel of death or an emissary of death, and maybe death isn't a bad thing. Maybe it's only sleep. And I put those two things together and for me it clicked. So I wrote the book."

MASON: "Uh-huh. And so you were just waiting for something to click on it?"

KING: "It has to click. There has to be, like, two or three moving parts to make it go. It can't just be one. So sometimes they all come together, and sometimes you'll get one piece and you have to wait a little while to get the rest. "

KING: "Yeah. It's like if you have a piece of furniture that you want to get into your house. And if it's too big to fit the door straight on, you have your choice: either you can wait until you get somebody to help you and tilt that piece of furniture so that it goes through, or you can just ram it and scrape the sides up. So you don't try to force it. It's a little bit like a batter at the plate; if you try to force base hits, you're going to strike out a lot. So I have a tendency to wait until I get the pieces together."

The entire interview is a must read, and the video adds another dimension to the conversation.


"Mason asked King if writing is a compulsion for the 65-year-old author: "Or do you need to have some story that just gets in your brain you can't get out?"

"It's a compulsion," King replied. "For one thing, when I was younger, my head was like a traffic jam full of ideas, and they were all jostling, and they all wanted to get out. And I wrote a lot more than I write now. I still write every day." (Stephen King and his compulsion to write)